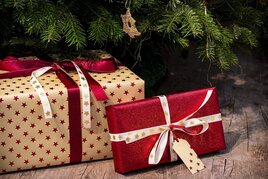 ​​I'm sure a lot of energy will go into planning how to make Christmas work this year. Juggling 'family bubbles' and trying not to offend anyone could turn into a balancing act that requires considerable skill – and grace.

For others, this year may well be little different from others. For many, there is no family to visit. For those for whom Christmas is full of painful memories, perhaps the restrictions will cause it to pass with less fuss. Either way, one thing we know is that Christmas will be different – but maybe there is a good sense in which it can be different.

This pandemic has caused us all to think through so many things that we take for granted. Life can be lived on 'auto-pilot' so perhaps this year is an opportunity to stop and ask – 'why do we do this Christmas thing every year?' Here is a story that will take us to the heart of it all.

Mary Roberts Wilson was an American Army nurse who was the first woman to earn a Silver Star for courage under fire during World War II. She bore the nickname 'The Angel of Anzio.' When the Allies got bogged down in the boot of Italy during World War II, they attempted a daring breakout by launching an amphibious landing on the Anzio Beach. Unfortunately, the Allies got pinned down at the landing site and came dangerously close to being driven back into the ocean. It looked like another Dunkirk was in the making.

Mary Wilson was the head of the fifty-one army nurses who went ashore at Anzio. Things got so bad that bullets zipped through her tent as she assisted the surgeon in surgery. When the situation continued to deteriorate, arrangements were made to get all of the nurses out. But Mary Wilson would have none of it. She refused to leave at the gravest hour. As she related her story years later, she said: 'How could I possibly leave them. I was a part of them.'

That is how God feels about us. He came to us in that tiny babe at Bethlehem. He didn't desert us in our hour of need. Christmas is about God's eternal identification with the human dilemma. Jesus is the reason for the season and is the greatest gift this world has ever been given. The giving of gifts at Christmas is because of God's great gift. A gift is only as valuable as the amount of love with which it has been given. A hand-drawn Christmas card from a child might be better than a Rolex watch. The baby Jesus in a manger in Bethlehem was a tiny gift, completely unnoticed by some, but it came with more love than the world has ever known. And what an impact that gift has had! Jesus' coming has influenced the entire course of history and brought hope into millions of lives.
​
Perhaps this Christmas needs to be different. A God of love is offering to stick with us, to walk with us through whatever the future holds. This year could be the beginning of that journey.
John Sparkes
​​​
​Return to Home page - Halesworth Community News articles