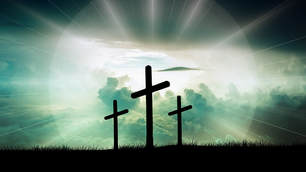 A man came up to me in the street in Halesworth some time ago and asked if there was anything that was too bad to be forgiven. He was clearly troubled and explained that he had done something seriously wrong. I explained that, whatever he had done, God offers forgiveness.

My youngest daughter Rachel and I were in Berlin for a few days a couple of weeks ago. We took the opportunity to learn about the history of the city. On a walking tour, our guide pointed out the place where the building had stood in which Hitler signed the declaration of war that heralded the start of WW2. Ironically, it was very close by, in an underground bunker, that Hitler took his own life as the Soviet troops advanced on the city. Between those two points in history, a minimum of 70 million people lost their lives. Imagine being responsible, as a result of his decisions, for the death of 3% of the world’s population.

What if Hitler had turned to God in that bunker? Do you think he would have been forgiven if he asked for it? I believe that, if he was sincere, he would have been. The cross of Christ is stronger than the most heinous crimes that any individual can commit.

Two criminals were crucified with Jesus. These men had committed serious offences - the Romans didn’t crucify people for minor misdemeanours. They both cursed and mocked Jesus, but something happened in the heart of one of them that made him change his attitude. He turned to Jesus and said, ‘Jesus, remember me when you come into your kingdom.’ There was no time to make amends. He couldn’t go back to the families of those he had harmed or even bereaved. He couldn’t apologise to family or friends he had let down. Imagine the deep healing in his soul that took place when he heard those words, ‘Today you will be with me in Paradise.’ There was nothing he could do – he was nailed to a cross – but he was forgiven and saved and would go straight into the presence of his Saviour. How could that happen? The power of the cross is stronger than any crime he had committed.

Is guilt spoiling your life? Are you struggling to get something from your past out of your mind? Do you feel so bad about yourself that guilt is a constant companion? Have you got so used to that feeling that you don’t realise how much it is robbing you of the lightness of spirit that you are meant to enjoy?