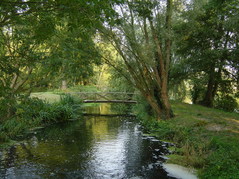 ​In every aspect of life in the first century AD, women had no rights. If you were married, you were owned by your husband in the same way that he owned sheep and goats. In Greek civilisation, it was the sign of a good woman that she sees as little, hears as little and asks as little as possible. Under Roman law a woman was always a child and was entirely subject to her husband and completely at his mercy.

Into this situation comes Jesus who treated women as equal. The spiritual, emotional and intellectual freedom that he brought had the potential to produce domestic mayhem. In the face of a male backlash what was Peter’s advice? ‘Live a lovely life’. Be smart on the outside but above all, be beautiful on the inside. There is only one thing that could threaten to undermine that attitude – fear. Your husband might threaten you, rant at you, even divorce you - but don’t give in to fear.

Why pick on fear? When the couple in the Garden did wrong they hid from God. Why? Because they knew they were naked and for the first time, that bothered them. They became aware of their vulnerability, so they looked for somewhere safe. Running from the only One who could make them safe was not a good idea.

Peter says to these wives, ‘You haven’t done anything wrong. Don’t let an angry husband make you think you have. If you want somewhere safe to go, then stay in that place of trust and humility before God and let him plead your cause. There is nothing that you are going to say that is going to change anything. Win your husband without a word.’ After all, that is what Jesus did. He was insulted and threatened and finally crucified but, although he felt everything a human being would feel in that situation, he never gave way to fear. He was safe in his Father’s love and under extreme pressure, ‘he entrusted himself to him who judges justly.’

What pressures do you face? People lying about you? Too much expected of you at work? An individual who seems intent on making your life as difficult as possible? Or something akin to the situation that Peter is addressing – things so tough at home that you wonder if you can survive? Don’t give in to ‘fluttering alarm’ (the true meaning of the word ‘fear’ used here). Bend to the pressure of fear - and you will stop doing what is right. On the inside, you will be hiding. You might clam up or hit out but you will be protecting that part of you that has suddenly felt vulnerable.

You are safe. You can take refuge in the heart of God - whatever the pressure. His love drives out fear. You might be in the storm but, as the song says, the storm is not in you. There is a peace and stillness because you have found your rest. We are not called to be a doormat. In some situations, there may well be a conversation to be had but if it comes from that place of peace and stillness, who knows, perhaps even the most difficult, awkward and even obnoxious person can be won by the beauty of Christ in you.
​​​Go to Bible insights 2017 - March - April - May - June - September - November - December - complete list​
Go to​ Bible Insights - Bible insights 2019 - Bible insights 2018