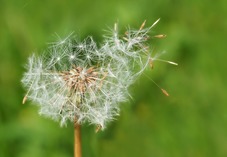 Did you hear about the farmer who saw his friend riding a donkey across the bridge? On his friend’s back was a heavy load. ‘Why don’t you put the load on the donkey?’ asked the farmer. ‘I’m being kind to the donkey and taking the load instead’ was the reply.

Are you carrying unnecessary baggage – items that you have got so used to that you don’t notice? Over the next few months we will look at some of that baggage and suggest ways we can get rid of it. Here comes the first one: is there someone that you can’t forgive? Perhaps it goes back years. Maybe as far as childhood. Perhaps it is right up to date.

How can I forgive? When the wrongdoing is serious it can feel next to impossible. Remember Jesus – who only did good, healed thousands, taught life-changing truth. As someone put it, ‘the most beautiful life ever lived was taken and smashed on a cross.’ What was his response? ‘Father forgive them because they don’t know what they are doing.’ Through faith in Jesus, his life can be lived through us and can give us the strength to find freedom as we let go of the burden of unforgiveness.
John Sparkes, February 2015
Go to next article - previous article
Return to Community News articles - go to Pastor's Notebook - Articles