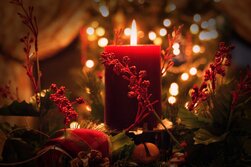 ​Christmas looked like a big muddle. A heartbroken Joseph was preparing to sever ties with his newly pregnant bride-to-be. That is, until a divine messenger stepped in and clarified things.

Then, at the worst possible time, Caesar Augustus got it into his head to take a census of the entire Roman world. This would entail a gruelling and dangerous trip to the city of Joseph’s ancestors. With Mary in her condition, she probably only managed about 10 miles a day – and it was a 90-mile trip that was very much uphill and downhill.

The trip through the Judean desert would have taken place during the winter, when it often poured with rain, would be in the 30s during the day and at night would be freezing. One of the most terrifying dangers in ancient Palestine was the heavily forested valley of the Jordan River. Lions and bears lived in the woods, and travellers had to fend off wild boars. On top of all that, bandits were common hazards along the major trade routes like the one Joseph and Mary would have travelled.

We all know that the hardships of this nightmare scenario did not end when Joseph and Mary arrived in Bethlehem. How did they keep sane? Imagine the potential for major marital disruption!
​
How did they cope with it all? What was their secret? The answer is that they had heard God and they accepted that he was in all of this. That kind of ‘chaos’ can make us question what God is doing but if you have heard him, and trust him, then you have peace in the storm.

So, how do we hear God? Regular visits from angels? Or is it about finding that place in our hearts where he wants us to learn to listen? For those of us who know God through trusting Jesus, we have his promise that he will instruct and teach us in the way we should go. He will personally counsel us as we go along because he loves us. That undergirds everything and means we can go forward with confidence – even into the toughest of circumstances.

So, how does this work?

Jesus said that the sheep follow the good shepherd because ‘they know his voice’ (John 10:4). You could be in a crowded restaurant but if your friend was in there and his voice could be heard above the noise then you would recognise it instantly. How? Because you have got used to hearing it. It is distinctive. God’s voice is distinctive.

So, where do we start? You have got to want to hear God’s voice. The people in the Christmas story could have reacted badly to the messages brought to them from God. Mary was going to be pregnant. Joseph was to take Mary to be his wife in those confusing circumstances which were wide open to misunderstanding and ridicule. They had humble hearts. They wanted to hear God.

How much did they want to hear God? I would suggest that their answer was – ‘whatever the cost.’ Jesus heard and obeyed his Father – whatever the cost. That attitude of heart brings clarity. Our problem is that it is so easy – even convenient – to confuse our wishful thinking with God’s clear direction. That is why it is so important to know our own hearts and to learn to tell the difference between our own emotional impulses and the impulses of God’s Spirit.

God will speak to us – but it will be on his terms. Nor will he keep saying the same thing over again. He wants us to learn to trust him. When he has spoken, deal with the powerful emotions that cause your mind to doubt. Don’t yield to the temptation to explore every possible permutation of the subject until you are convinced beyond doubt. Trust.

As part of that process of learning to trust, it can be helpful to share your thoughts with someone who loves and knows you well. If they are wise, they will help you distinguish between your own natural inclinations and the voice of God. Check your attitude and don’t endlessly ask advice until you find someone who will tell you what you want to hear. Seek out people who will tell you the truth. Make yourself aware of your own subconscious ‘avoidance tactics’. For example, not sharing with people who will see through what you are doing and give you advice that you don’t want to hear.

God’s intervention in that first Christmas was ‘a step at a time.’ We want the whole plan. God wants us to trust. He will show you the next step – take it. The result will be peace – but not necessarily straight away. In fact, sometimes God’s guidance can produce internal turmoil initially because it clashes with perspectives that are not aligned with the way God does things. Hold in there to the truth that you have heard, and that peace will come – and you will have grown in the process.
​​Return to Home page - Bible insights January 2019 - March 2019 - May 2019 - June 2019 - July 2019 - September 2019 - October 2019
Go to Bible Insights ​- Bible insights 2018 - Bible insights 2017