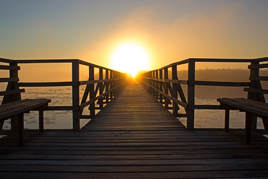 ​Joseph was a good man - so good that he put heart and soul into everything he did. The problem was, that everything he did, went right - and then wrong. Was God playing ‘cat and mouse’ with this man? He took responsibility for his father’s flocks and then got into trouble from his brothers as a little tell-tale. He was sold into Egypt, set to work in the household of one of Pharaoh’s officials, and everything went fine. He worked hard, God blessed him, so Potiphar entrusted to his care everything that he owned - until it all went pear-shaped again.

The way it all went wrong was particularly nasty. Potiphar’s wife tried to seduce him, persistently, and just as persistently, Joseph refused. In the end, she grabbed him, he ran out, leaving his coat behind and she made up a pack of lies about how he tried to force himself on her. Imagine the pain of being on the receiving end of Potiphar’s fury! Up to that point, Potiphar thought the world of Joseph. Joseph had done absolutely nothing wrong and yet here he was being thrust into prison. How would you have felt? You give years of your life to serve someone to the very best of your ability, someone lies about you, the person you have served turns against you and puts you in jail.

At least now you have time on your hands. Time to think, time to feel sorry for yourself, time to reflect on how difficult life has been for you. Your mind wanders to your childhood - it wasn’t easy being part of a family where dad had children by two wives and two servant girls! It might have felt good for a while being dad’s favourite, but your brothers certainly made sure it hadn’t worked in your favour. Their resentment turned to hatred and some of them wanted you dead. Not the ideal start. Anyway, you gave this thing called life your best shot, it didn’t work, now maybe it’s time to look after yourself.

Somewhere deep within Joseph’s spirit there must have been an awareness that this was part of a bigger story. Those dreams in his youth must have embedded themselves within Joseph’s psyche. How important it is to know that there is a call on our lives. What is happening to us, even in our worst moments, is not just a disorganised nightmare.

So, what are you going to do, just where you are – now? Josie Bisset said, ‘Dreams come in a size too big so that we may grow into them.’ Could this disaster be part of God’s way of getting us to grow? Why else would God keep doing this to Joseph? Why else would God allow this to happen to you? Shall we collapse, go into our own world – or do as Joseph did, stand tall and get on with the job in front of him.
​
It is easy to complain that God has left us when we find ourselves in such circumstances. He can feel so distant. Joseph discovered that, even there in the prison, God was with him, because he stood on his feet, met the challenge and continued to serve with heart and soul. It didn’t matter what people thought, it is what God thinks that matters. As long as his favour is on us, we will succeed. And just as he puts his favour on us, so he gives us favour with those he chooses to and Joseph quickly found himself being entrusted with responsibility in the prison. Rather than being embittered, he served with the same energy and commitment as in Potiphar’s house. Even when he was forgotten by the cup-bearer, he wasn’t forgotten by God. God has his timing. You can’t rush these things, growth takes time and when he was ready, and the situation demanded it, God called his man out of the prison and onto the world stage in such a powerful way that many people’s lives were saved.

Don’t allow yourself to be defined by your childhood, by your difficult circumstances or by people turning against you but rather by the fact that God is working to draw you to himself and to work his purposes out through you.
​​​Go to Bible insights 2017 - March - April -  May - June - August - September - November - complete list​
Go to​ Bible Insights - Bible insights 2019 - Bible insights 2018