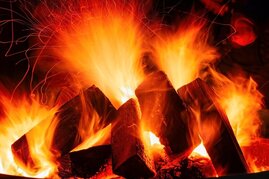 ​In these strange and difficult times, I am sure many have thought we could all do with some divine intervention. Recently, my mind has gone back to dramatic instances of such intervention. Many years ago we ran Family Weekends at Sizewell Hall – a Christian conference centre. On one such weekend, there was a young couple with a toddler. They had no Christian background and were there for the following reason.

A few weeks earlier, they were in their lounge with a large open fire burning in the grate. Usually, there was a guard around the fire, but for some reason, it hadn’t been put in place. To their horror, they suddenly realised their toddler son was fearlessly running towards the fire – and they were too far away to do anything about it. He tripped and was about to fall and, as he fell towards the fire, they both saw the hand of an angel reach in and prevent his fall and stand him on his feet. They didn’t understand what was going on, but it was so real that they were on that weekend to find out more.

Some of you will know the story of George Muller, based in Bristol in the 19th century,  who cared for over 10,000 orphan children and established 117 schools which offered education to more than 120,000. He never asked anyone for a penny, but there was always enough for the children. One morning, in one of the homes, the children had all come down for breakfast – and there was none. Muller prayed and thanked God for what he was going to provide. As soon as he finished, there was a knock at the door, and the baker stood there. "Mr Muller, I couldn’t sleep last night. Somehow I felt you didn’t have bread for breakfast, and the Lord wanted me to send you some. So I got up at 2.00 am and baked some fresh bread."

No sooner had he left when there was a second knock on the door. It was the milkman. He announced that his milk cart had broken down right in front of the orphanage, and he would like to give the children his cans of fresh milk so he could empty his wagon and repair it.

Wouldn’t we all like God to step in right now and finish this whole virus episode? Avoiding people, not able to show our faces, not able to hug – it’s horrible. Sometimes God does step in and prevents things going wrong – and sometimes he doesn’t. We live in a wonderful world but one that is flawed and damaged and won’t be perfect this side of heaven. What he does want is to walk with us through the challenges and struggles of life. If we put our trust in him, he has promised to be with us, to guide and to strengthen us whatever life holds for us.
John Sparkes
​​
​Return to Halesworth Community News articles