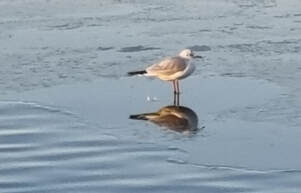 A bout of severe overnight frosts has left some of our rivers and local lakes and ponds frozen over. The gull in our picture is standing on a circle of ice on the river Waveney at Oulton Broad. The ice, acting as a mirror, gives a wonderful clear image of the gull. From a distance it looks as though the gull was standing on a small rock.

One of the most comical things I have watched is wading birds trying to walk across ice. They slip, slide and make futile attempts to stand upright. It’s not until they eventually plop into the water that they can take off in flight. Our gull, however, could easily lift off the ice with a flapping of his wings. His image would instantly disappear, leaving him to fly, fish and feed off take-away scraps.
​
We can, as the gull has done, present an image to suit our circumstances. However, that image can be a hindrance to us because we’re in danger of covering up who we really are. It would be better to present our image as an extension of ourselves to enable us to do well in our choice of career, social setting and family life. It is a most disillusionary process for someone to discover that there is no substance to us because we present differently to the person who we really are. 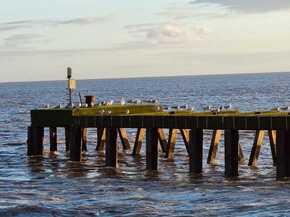 A few days later I watched a flock of gulls sitting on the harbour wall at Southwold. The weather conditions were poor – grey skies, an offshore strong wind and drizzly rain. The wind was driving the waves and the spray backwards into the sea, rather than breaking on the beach. The gulls, seemly unperturbed by these poor conditions, faced into the headwind. Not a ruffled feather could be detected. As they took off in flight they again headed into the wind and hovered motionless, and then, with a downward sweep, allowed the wind to lift them up into their chosen flight paths. This seemingly effortless exercise illustrated a most effective way of handling adversity. For instance, it sounds better to turn our backs on difficulties believing they will either sort themselves out or will not be able to affect us. However, it’s better to face something and make a decision from that stance.
​
The gulls used the situation for their own good. Lift off and flight went well by facing the strong wind. If, once in flight, they had turned and faced the direction the wind was going in they would have been blown in one direction only. Their ability to hover, or stay still, gave them the opportunity to choose their direction of flight. Standing still when faced with adversity gives us the opportunity to find the right way forward. We can learn much from taking time to observe the natural things around us. The gulls gave me the opportunity to do this.
Merle Sparkes
​Return to Home page - Merle's reflections