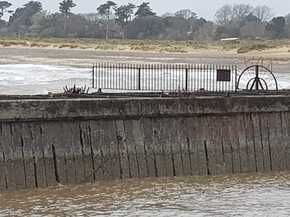 Southwold and Walberswick on the Suffolk coast are separated by the River Blyth as it flows into the North Sea. The outlet of the river narrows and is fortified by a stone wall on the Southwold side and filled-in groynes at Walberswick. I often sit on the Southwold side overlooking the fishing boats and the Walberswick beach and dunes. The fast-flowing river and sandbanks of the sea at Walberswick make swimming dangerous and surfing, surfboarding and kite surfing quite a challenge and, at times, quite hazardous.

​One beautiful sunny afternoon quite recently I saw a teenage boy and girl clamber onto the groynes and negotiate the length of the first wire defence. The young lad was full of energy, whereas the young girl was extremely cautious. The wire defence ended abruptly, and their progress was halted when the defence formed a right-angle blocking off the rest of the groynes. Totally unfazed, the young man pulled himself over it and, after a few tentative heel-to-toe steps to gain his balance, jauntily continued on his way. The young girl stopped and, after what appeared much deliberation, attempted to clumsily follow suit. Once her feet hit the other side she stiffened and then very, very tentatively proceeded to take a few steps. She then went onto all fours, bottom stuck in the air, and tried to carry on her way. She must have become incredibly dizzy looking at the swirling sea beneath her for she stood up and made a dash for the wire fencing. Once she was over it and the beach appeared beneath her, she jumped off to safety. The young man turned round and, with great confidence, ran to the wire fencing and proceeded to return, not only to the beach where the young girl was, but further on right up to the dunes and the end of the harbour protection and beginning of the creeks. He was obviously buoyed by his success! 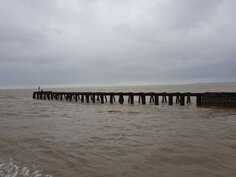 I was immensely relieved that they were back. However, I did think that the young girl would never attempt that again but, because it had worked, the young lad would attempt it again to show off in front of the people on the beach. There is a very clear sign warning people not to go on the groynes. Not only are the sea and river dangerous but the groynes have been there for many years and are in various stages of decay.
​
The whole episode gave me an illustration of foolhardiness. It brought out the ‘daredevil’ in the young man just as some of us enjoy a challenge with all its risks. However, he was wrong and was in breach of the local byelaws. The young girl I fear can be like some of us who do not like to look foolish when we give in to our inner trepidation and probable common sense. She is the one I feared for the most because she lacked confidence and could not carry the challenge off. Don’t we all try to look good at times but in doing so let ourselves down and get hurt – is it really worth the risk? Would it not be better to let common sense prevail rather than build our ego up unnecessarily? ​
Merle Sparkes
​
​
​Return to Merle's reflections 2021 - go to Merle's reflections 2022