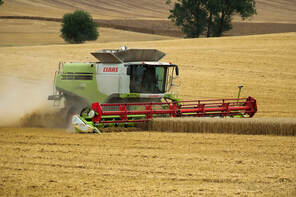 There, in the distance, was a Claas combine. It was hot, dry, and dusty. All around, as far as the eye could see, were fields that had been combined. I had not only a wonderful panoramic view of straw-coloured fields and blue sky, but also a trip down memory lane of harvest times as my children grew up. There were memories of bike rides combine-spotting and picnics on dusty verges where sandwiches tasted of grit. The highlight of their adventures would be a ride in the combine or tractor - until the law was changed. We were extremely knowledgeable concerning the makes of different combines – the red Massey Ferguson, the gold and yellow New Holland, shiny tractors, overladen carts of straw bales – it was wonderful. And naturally there are memories of late harvests, droughts, wet summers, poor yields, as well as good harvests.

After the harvest there was the burning of the stubble, and ploughed fields with the gulls risking their lives to gobble the upturned worms. One of my sons had his tractor driving lessons before his car licence and the highlight of his summer was helping out with the harvest.

However, technology has changed. There are air-conditioned cabs on all the farm machinery, stubble burning has been banned by the government and much ploughing has been replaced by harrowing and cultivating.

Memories of past harvests and machinery fade into the past. Weather patterns have changed too with much debate and investigation of how to still reap a good harvest in sometimes quite adverse conditions. Not only has the harvest changed, so too has the world we live in, the politics of governments and ourselves. We have seen a rise in crime, terrorism, addiction, abuse and the crippling of economies and devastating human loss because of disease.
​
And yet – I remind myself of a consistent constant in life. There is love, care, provision, and hope. Now, more than at any other time, we need to have a vision for the future in a changing world. We see governments and groups seeking to move on from the difficult times the world has experienced. But groups of people are made up of individuals and so, as an individual, I need my own personal vision to hold on to the values that matter most in the midst of changing circumstances.
Merle Sparkes
​
​
​Return to Merle's reflections 2021 - go to Merle's reflections 2022