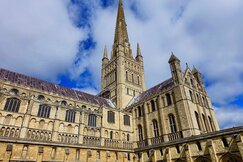 Stephen asked what proportion of our hearts belong to God and what proportion to the world. He had been struck by the contrast between the busyness in the commercial areas in Norwich the previous day compared to the number of people at the cathedral. God desperately wants our hearts because he knows that is best for us and what we need as we walk through life.

Paul Wilcox, who was visiting the church, shared a picture of a large sheet in the sky above the meeting room. The sheet represents peace and he pictured it coming down onto the building and completely enveloping it. Everyone who comes through the doors into the church will experience it, not a peace as we understand it but peace that God understands. John commented that it is an important prize that people can come to the church and find peace - it gives us a responsibility as a church. Peace is a gift that God gives, we cannot work it out - the challenge to us, as God's people, is to live in that place of peace so people sense it as they walk through the door. It is an encouraging challenge to us that we are guardians of that peace insofar as the Lord speaks to us and teaches us to live in peace. '​Let us therefore strive to enter that rest' Hebrews 4:11 (ESV).
​
Tim commented that he had been out for a bike ride on Christmas Day and had stopped to look at the scenery across the fields, a scene that was very peaceful and very still, in contrast to the busyness of Christmas, and he had been aware of the Lord's presence and peace. We can loose that sense of peace very quickly when life gets busy. However, when our heart is for the Lord, we can retain that sense of peace within, even in the midst of all that is around us. The challenge in the coming year is to find the Lord's peace, even when we find ourselves in situations which aren't peaceful.

David had been for a walk through arable fields this week. He had done the same walk on a recent very frosty morning and had watched contractors who were making the most of the frost in the midst of a very wet autumn, by drilling the ground in order to plant seeds. The frozen ground provided an opportunity to plant the wheat crop, even though there will be no sign of the crop for several weeks. It may be good to see difficult times in our lives as opportunities rather than problems. This year may be the time when things sown will come to fruit in the Lord.

Jenny had been out for a walk by the beck and had observed the water, which was flowing in one direction - it flows forward all the time, it doesn't go backwards. Some of us can dwell on the past at times, but we have to keep going forward. Life is a journey and we need to keep going forward and not look back.
15th December 2019
​Claire read the account of the birth of Jesus from Luke 2:1-20 -​ 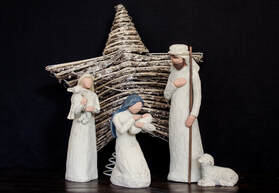 ​'In those days Caesar Augustus issued a decree that a census should be taken of the entire Roman world. (This was the first census that took place while Quirinius was governor of Syria.) And everyone went to their own town to register. So Joseph also went up from the town of Nazareth in Galilee to Judea, to Bethlehem the town of David, because he belonged to the house and line of David. He went there to register with Mary, who was pledged to be married to him and was expecting a child. While they were there, the time came for the baby to be born, and she gave birth to her firstborn, a son. She wrapped him in cloths and placed him in a manger, because there was no guest room available for them.

And there were shepherds living out in the fields nearby, keeping watch over their flocks at night. An angel of the Lord appeared to them, and the glory of the Lord shone around them, and they were terrified. 10 But the angel said to them, “Do not be afraid. I bring you good news that will cause great joy for all the people. Today in the town of David a Savior has been born to you; he is the Messiah, the Lord. This will be a sign to you: You will find a baby wrapped in cloths and lying in a manger.” Suddenly a great company of the heavenly host appeared with the angel, praising God and saying, “Glory to God in the highest heaven, and on earth peace to those on whom his favour rests.”
​
When the angels had left them and gone into heaven, the shepherds said to one another, “Let’s go to Bethlehem and see this thing that has happened, which the Lord has told us about.” So they hurried off and found Mary and Joseph, and the baby, who was lying in the manger. When they had seen him, they spread the word concerning what had been told them about this child, and all who heard it were amazed at what the shepherds said to them. But Mary treasured up all these things and pondered them in her heart. The shepherds returned, glorifying and praising God for all the things they had heard and seen, which were just as they had been told.'

David commented that God the Father was single-minded; he saw how people had turned away from him and he sent his son at Christmas. He asked whether we are single-minded in the way we live our lives for the Lord.

Kelly spoke about light and darkness - as Christians there is a sense that we walk in the light whilst living in a world of darkness. One of the lines from the carol 'Silent night' which we sang earlier is 'radiant beams from Thy holy face'. God's radiant pure light lives in us and we need to be single-minded to not let the darkness around penetrate our hearts.

Stephen had witnessed a meteor shower last night and had noticed that there was a lot of cloud. He fixed his eyes on one of the stars and it looked like it was moving but it was actually the clouds that were moving, not the star. God doesn't move; his faithfulness is immovable. If we stand firm in the Lord the clouds which pass through our lives will not move us - we will be able to stand firm and stay in relationship with the Lord despite the clouds.

Merle had watched a nativity play on the TV and one line from the play had stayed with her - 'one night, one moment'. It was literally in one moment of one night that the baby Jesus took his first breath and changed history. That moment brought the past and the future together. God had planned the birth of his son and it came at exactly the right time and our eternal future is secure because of that moment in time.
8th December 2019
Merle spoke about the images we see on the news, in particular the fires near Sydney which the firefighters are struggling to put out, and the state of the world today. As Christmas approaches she asked where are our hearts - do they go out to those who are struggling and less fortunate than ourselves? She encouraged us to pray that God will stay the forces of evil in the world and to ask God in his mercy to send the rains to extinguish the fires in Australia. Later in the meeting we prayed for the world, for our own country and for the specific situations which were mentioned.

Richard spoke about following after God and shared some of what he has learnt on his personal journey of handing his notice in at work and trusting God with his future. He said that church is not meant to be a nursery, but a launch pad from where we can go out and follow God's leading. It is a place where we do receive healing, but with the purpose of walking with God and serving him in whatever sphere he calls us. We are to be like young oxen who follow after God, not going one step ahead of him and trying to work everything out and then moaning when things don't happen as we would like. Richard has had to learn to step back, keep it simple with the Lord and trust him. At the Men's meeting last week he had been encouraged to face his fears - by facing them head-on with God.
​ 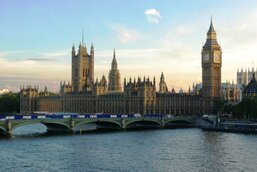 Joy followed on from what Merle had said by sharing a personal example from her week. She had visited her daughter in London during the week and had found herself walking across London Bridge towards the Houses of Parliament. It had been an overwhelming experience as she reflected upon the attacks which had taken place there last week and witnessed the tributes to the victims and she had been able to pray for the situation. She had also prayed outside the Houses of Parliament and, as she prayed, a rainbow appeared over the building. The sky turned black and it rained, followed by another spectacular rainbow. She felt that God was saying that he is in control, even though it may not look like it, he was in control yesterday and will be tomorrow - we must keep praying and trusting.

Celia spoke about putting her Christmas decorations up and said that she had felt sorry for herself as life hasn't turned out as she had expected. Initially she had chosen to wallow in self-pity and had felt worse but then realised that she had the power of choice over her feelings and she had decided to make a good choice and had gone and visited someone whose situation is more difficult than hers, which had enabled her to change how she felt. John added that we're created for others and, even when we feel awful, the best thing to do is to get back in line with God's design and give ourselves away. He shared the illustration of a magnet - we can all have any number of negatives going on inside ourselves which we are familiar, and often comfortable, with. It's like having a magnet in the core of our being which attracts further negatives and anxieties. If we chose to look outward and put what others are feeling ahead of ourselves then it can break that magnetic force-field and set us free to live and love others.​
​​​​​​​​​​​​Return to Home page
Go to About HCC - Our history