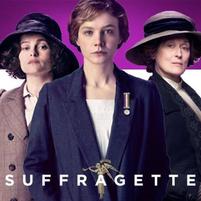 ​Do the principles John writes about apply to every sphere of life? Should women take the lead and take responsibility in the workplace and in government - or should they leave those roles to the men? Controversial questions! However having been to see the film 'Suffragette' recently they are questions we have debated with the intention of seeking to apply God's truths to the whole of life.

'Suffragette' features the struggle women had in the 1910s in their fight for the vote, which they rightly saw as the first step towards equality in the workplace. Maud, the main character in the film, a working wife and mother, faced tremendous dilemmas as she sought to fight against the oppression and physical and sexual abuse she and other girls faced in the East London laundry where they worked, yet without the support of her husband, who didn't share her vision or strength of character. As a result she lost her home and her beloved son who her husband put up for adoption - against her will but, being a woman at that time, she had no say or rights over her child's future. It was heart-breaking to watch the difficult choices she was forced to make yet it is as a result of the choices Maud and other women of the time made that we are able to live in the freedom and equality we have as women today. Women over the age of 30 were granted the vote and the right to stand for Parliament in 1918 and women gained full and equal voting rights in 1928.
​
As we talked about the film afterwards it raised many challenging questions - 'Do we take our freedom and equality for granted?', 'Would I have the strength of character and determination to make such a costly stand for what I believe in?' and 'How does God's order affect the way women take the lead in society today?'.

The conclusions we came to are that Jesus' teaching brought a new freedom and equality to women in New Testament times, within the roles outlined in John's article, of submission to Godly leadership in the home and church. The word ‘submission’ can have many connotations today, including a level of oppression, as witnessed in the film. It can produce a negative response, especially in women who have been or fear being mistreated. However in this context I use the word ‘submission’ in a Biblical context, referring to a woman who looks to her husband, or church leader where she doesn’t have a husband, for Godly leadership. He, in turn, is instructed to love his wife as Christ loved the church as outlined in Romans 5:22-33. This structure provides a context and secure base for the woman to fulfil her God-given potential. As we discussed the film we felt that those principles apply equally in our society today - women are equal and free to hold management and leadership roles within the workplace and government but in order to fulfil those roles it should be from that secure base of healthy submission within their home and church lives.
​
'Suffragette' is an excellent film, well-acted and with a very good cast, which provides much food for thought and discussion - definitely worth seeing.
Julie Gorton, November 2015
​Return to Understanding men