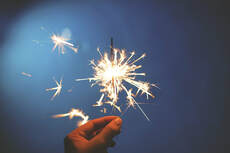 Ephraim got off to a flying start. Although he was younger than his brother Manasseh, his grandad, Jacob, gave him the blessing of the firstborn. This meant he had a privileged position. His own children came along, the family grew and eventually became the tribe that was looked up to. Indeed, the name ‘Ephraim’ was often used to describe the whole of the ten tribes of the north of Israel.

Things were going well for them but when we come to this summary of Israel’s history in Psalm 78, we find this simple, damning charge that they ‘turned back on the day of battle’. What made it worse was that they had the resources – ‘though armed with bows.’ They had the blessing of God on them and the latest gear to do the job – and they crumbled. Unfortunately, this wasn’t an isolated incident. It characterised them.

Where did it go wrong? God called them and equipped them – but it wasn’t enough. He needed their hearts, their devotion, their resolve so that they would fight on in the heat of the battle and not ‘turn back’.

That is why Jesus allowed the heart of Peter to be tested when challenged by a servant girl. After the test, which he failed miserably, Jesus wanted to know one thing, ‘Peter, how much do you love me?’ It wasn’t simply, ‘Do you love me?’ but ‘how much?’ Peter had boasted that even if others ran away, he wouldn’t. Jesus was saying that, if he was to fulfil the responsibility entrusted to him then his love would have to exceed that of those in his care, so he could be an encouragement to them in the heat of the battle.

What have you been entrusted with? It may be the running of a home, a team at work, a class of students, responsibility in the family or amongst friends. It may be the challenge to pray or to do simple acts of kindness. Ephraim had a calling on his life and he never fulfilled it. God’s blessing is on you, he has equipped you to fulfil your calling. What will you do with it? Collapse under pressure? Feel sorry for yourself when ‘it’s not fair’? Fall at the final hurdle? Or will your love for the Lord see you through, give you the strength to not turn back, enable you to draw on all the resources that God has provided until the battle is won and the victory secure?
​​Return to Home page ​- Bible insights March 2019 - May 2019 - June 2019 ​- July 2019 ​- September 2019 - October 2019 - December 2019
Go to Bible Insights ​- Bible insights 2018 - Bible insights 2017