July Bible insights
26/07/2016 - Exodus 36:1
'When the people saw that Moses was so long in coming down from the mountain, they gathered round Aaron and said, "Come, make us gods…"' 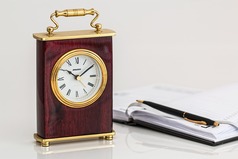 Forty days is a long while to hang around waiting – especially in a desert at the foot of a mountain. There was no doubt that God had used Moses as a mighty leader. Nor was there any doubt that God had called him to climb that mountain and to meet with him there. The Israelites knew all that – but the passing of time can have a strangely eroding effect on truth. What was once so clear, now becomes vulnerable to little niggly doubts. Slowly perspectives change, life moves on. They said, ‘As for this fellow Moses who brought us up out of Egypt, we don’t know what has happened to him.’

Now, what an amazing thing to say. Here is a recognition that Moses was the one God used to bring them out of Egypt in such a powerful and dramatic way – and now he’s history because he’s been away for a while. And to make things worse, his own brother Aaron made a golden calf as a substitute for Moses! Moses has disappeared from view but at least we have a metal animal that we can worship as the one who brought us up out of Egypt!

We can allow time to ‘change’ truth or we can use that time to let truth change us. Those long forty days could have been an opportunity for the people to prepare their hearts for what God would say to them through Moses. With God, time doesn’t change truth. Can we remember when God spoke something so clearly? Perhaps it was an assurance of forgiveness, of acceptance, or a specific word about a specific situation. Has the clarity gone with the passing of time? We can go back to that place, get hold of the truth and let that truth change us.

How easy to ‘jump the gun.’ We can want something so much that even though God hasn’t given the green light we step in and make it happen. Abraham, the great father of faith, learnt some difficult lessons on that one. Are we anxious about the job, the home, the children? He will provide. Use this time to learn to trust him and to discern his voice. If he hasn’t given you that inner witness as to the rightness of something perhaps he is doing something else with you at this time. Mary and Martha only saw the awful effects of illness in their brother Lazarus – and understandably wanted him cured. Jesus loved him so much that he waited – until he died. God has bigger purposes and we do well to keep in step with him and use the time as he directs. Don’t be pushed into a line of action by what others expect of you – hear the Lord for yourself.
​
When you think you know someone and want to make that commitment in marriage, how well do you really know them? Has God given the green light? Wait until he does – and that will almost certainly involve going beyond what initially attracted you to the other person to discovering the weaknesses that they need to work on. The big question will always be, are they willing to work through those weaknesses with God’s help?