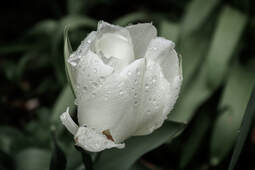 ​Everything had started so well for Hannah. She had married a wealthy man who truly loved her. Life was good – until it became apparent that she couldn’t bear children. In those days, having a husband was virtually a necessity for survival, but to not have children was a disgrace. So Elkanah acted within his legal rights and married a second wife in the hope that she would produce a male heir. Peninnah duly obliged. Despite this, Elkanah loved Hannah.

Now Hannah was in real trouble. Peninnah, jealous of her husband’s love for Hannah, set out make life as miserable as possible for her rival. And she succeeded. She had the children, Hannah had the love. Peninnah had the motive and means to completely ruin Hannah’s life. We read, ‘her rival kept provoking her in order to irritate her. This went on year after year.’ We find her in, ‘deep anguish…weeping bitterly.’ The name ‘Hannah’ means ‘grace.’ She certainly needed it!

Do you feel like that in life? What should be a joy, what could be so fulfilling, what could be the best time in your life is beset by trouble and that through no fault of your own. To make things worse, we read that ‘the Lord had closed Hannah’s womb’ (1 Samuel 1:6). So, God had done this and caused all this trouble! Why?

Would there have been a Samuel if it hadn’t happened? Would Hannah have ever come to such a place of trust and commitment to God’s purposes that God could raise up a prophet through her to lead Israel? All that misery, all the desperation and pain, all the tears – that was what gave birth to a national leader who would influence a nation for God.

When Jesus saw the man born blind his disciples wanted to know if it was because the blind man had sinned. Jesus said no, ‘but this happened so that the works of God might be displayed in him’ (John 9:3). Hannah went through all that misery because God had a work to do through her.

Lazarus was ill, so Jesus stayed where he was for two more days because ’Jesus loved Martha and her sister and Lazarus’ (John 11:6). That doesn’t seem like love, to put his friends through all that misery. But Jesus did love them and said, ‘it is for God’s glory so that God’s Son may be glorified through it' (John 11:4). There is a higher purpose, a higher call.

Have you long carried that desire in your heart to be used by God? Have you all but given up hope? It would have been so easy for Hannah to hit out against God and her rival in frustration and anger. She could have been forgiven if she had refused to go to the tabernacle at Shiloh rather than being subject to constant humiliation.  But she trusted and prayed and stayed the course to the point at which God’s perfect purposes were worked out in and through her. ​
​​Return to Home page ​- Bible insights January 2019 ​ - May 2019 - June 2019 ​- July 2019 ​- September 2019 - October 2019 - December 2019
Go to Bible Insights - Bible insights 2018 - Bible insights 2017