An encouraging surprise
​I received two Christmas cards with the same wording, one from my oldest nephew and one from my sister-in-law. At first glance there was a dark black background with these gold embossed words on it:
In the darkest
Winter nights
Christ’s love still
Shines the brightest
​​I placed it in the bay window which faces the front garden and, as the light came through the window, it revealed the background of the dark card. It showed a starlit night with one large bright star and the silhouettes of wise men on camels journeying towards a distant city. In the light of the current dark times that we’re living in, it was a very meaningful card expressing faith and hope. 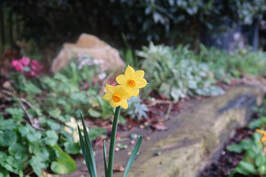 A couple of days later I looked out of the window of my husband’s study, which faces the back garden, and, to my surprise, there was a double-headed narcissus in full bloom. I had seen the first shoots of this bulb at the end of November. It wasn’t quite expected to show itself until the beginning of February. Seeing this spring bulb in all its glory flowering between Christmas and New Year was an encouraging surprise. A wander round my garden revealed crocuses, irises, hyacinths and daffodils all beginning to show.

It made me look forward with anticipation to the spring. A reminder that, despite all that’s going on around us, Mother Nature has decided to reveal herself early. In spite of icy frosty mornings, a smattering of snow, hail and heavy rains with flooding there has been no damage to these hardy little specimens of colour which we so look forward to in the Spring.

It reminded me of these words from 1 Corinthians 13:13:
‘And now abide faith, hope, love, these three; but the greatest of these is love.’
Merle Sparkes
​​
​Return to Merle's nature blog 2021
​Go to Nature blog