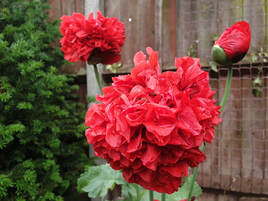 I’ve learnt two things from my garden this week. The first, because of physical limitations now, is to ask for help when I need it. The second is that there are many invaders to my garden – there are the beautiful and the ‘nasties’. I have many friends and family who enjoy sitting in my garden and among them family and a friend who will help me when I get stuck with the maintenance.

I called a friend to help clear an overgrown patch of weeds and excessive foliage. Standing in front of her were two poppies, one, almost as tall as the fence, had numerous flowers and buds. It looked quite stunning with single-leafed pale pink and purple petals. The other was shorter with fewer buds and red petals just about to open. She asked if I would mind her pulling out the pink poppy as it was blocking a rather handsome fern growing behind it. “That’s a good idea” I said, “I didn’t plant any of the poppies and some are too prolific and a bit of a nuisance.” So, the pink poppy was removed and the red one left. It was a good choice because a couple of days later the red poppy flower heads burst into stunning red puffballs.

I thought how much like a garden we are. We pick up good and bad things as we journey through life, some need weeding out while others need cultivating to make them our own. The poppies were an example of selecting the best and making it ours. Taking up the offer of help left a section of the garden where what was beautiful remained. What was excessive and nasty, which could mask the best, was removed.
Merle Sparkes
​​
​Return to Merle's nature blog 2021
​Go to Nature blog