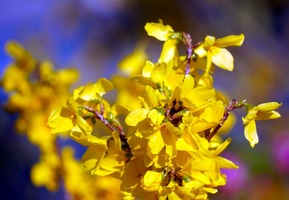 ​One of the small trees in my garden has not done very well. There wasn’t an abundance of the white florets in the spring or an abundance of maroon coloured leaves in the autumn. This year I asked my grandson if he would like to give it a drastic prune so that it could start again, as it were. He did very well, and I was pleased with the outcome. However, there was just a niggle about this tree trunk and its drastically shortened branches. Every morning for the last two weeks I would stand at my window and try and work out what was wrong. This room only saw sunlight for a very short time in the summer during the afternoons. The shade of the tree had eventually blocked out this tiny bit of sun and darkened the room even further during the rest of the day. Once the branches had been cut down the room was flooded with light. After two weeks of pondering what was wrong, the decision was made to remove the tree completely.

I’m so glad I took the time to work out what was unsettling me. To have let the tree grow again would have been the result of a job half done. The root of the matter needed to be addressed. It required a far more drastic approach. The removal of the tree has left me with the opportunity of replacing it with a smaller shrub which can be effectively pruned to never block the light again.
​
The lesson I’ve learnt from removing this tree is the ease with which we allow the light of God to be blocked out from our lives, this light that goes before as a guide or exposes the grey areas of compromise and the darkness which pervades our soul through the experiences and crises which befall us.
Merle Sparkes
​​
​Return to Merle's blog 2020
Go to Nature blog