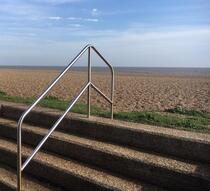 We received a surprise invitation to have fish and chips at Aldeburgh at the weekend. My daughter's instructions were to order at the fish and chip shop in the middle of town and then cut through one of the narrow roads straight down to the sea, where there are benches to sit on. We found our parking on the front with a pleasant view of the enormous shingle beach that leads down to the sea. The benches she had mentioned though, were on the shingle and seaward side of a fairly short, sturdy wall, not on the tarred prom. Why, I asked myself, couldn't those benches have been this side of the wall on the prom? The shingle at Aldeburgh is deep and almost un-walkable on! There was the possibility of two ways to gain access to the beaches - some steep steps up and over the wall or sitting on the wall and swinging your legs over to drop onto the shingle side. I opted for the steps and, to my surprise, found there was a fairly wide path on the opposite side. The problem of accessibility to the benches was solved.

I wonder how many times we see apparent obstacles and, without investigating them, we give up all too quickly. Whoever planned putting benches for people to leisurely enjoy the vast shingle beach and sea at Aldeburgh had been quite thoughtful. One's vision was not being continually obscured by people running, walking or skipping along the prom Only those looking for a nice sea walked past. In actual fact that brick wall prove good sea defence, at the same time giving pleasure to those enjoying the attractive beach.

Sometimes we're in danger of seeing obstacles that aren't really there and missing opportunities to pause a while and enjoy someone else's considerations for us.
Merle Sparkes
​​
​Return to Merle's blog 2020
Go to Nature blog ​