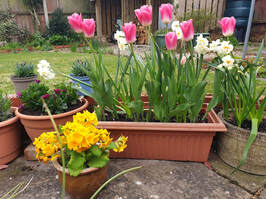 I was pleasantly surprised this morning to see the spring flowers on the patio were still standing upright in spite of the gusts of the westerly gale and heavy rain overnight. We have had weeks of continual cold of northerly and north-easterly winds on the East Anglian coast. It has been so, so cold. The wind turning around to the south-west has been a longed-for change. However, we didn’t quite expect a gale and the deluge of rain.

I had a choice to make with the pot plants, whether to move them to the shelter of the wall of the house or to leave them where they were. I decided on the later, mainly because the pots are heavy, knowing that I was taking a chance.
​
Sometimes we have to take risks and, in taking them, we find out how strong we are. Sometimes we can be overly protective, not only of ourselves but of others as well. It is only by putting ourselves in difficult situations that we can appreciate who we are when the challenges come. I didn’t say to those spring flowers, ‘You can survive’, but I hoped they would. However, I have recollections of parents, teachers and colleagues saying, ‘Go for it, you can do it’. It never does to duck out!
Merle Sparkes
​​
​Return to Merle's nature blog 2021
​Go to Nature blog