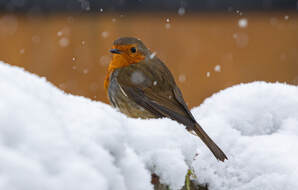 One of the things I look forward to at this time of year is standing outside after there has been a snow shower. A silence seems to descend with the snow to cover everything with a soft, fluffy blanket and, at the same time, muffle all the sound. Some of my friends would call it eerie, but I love the silence.

Thirty-six years ago, on 26th April 1986, one thousand square miles surrounding the Chernobyl nuclear plant descended into an eerie silence. Poisonous gases erupted from reactor number 4. Although only 100 lives were lost in the immediate aftermath, the human and ecological effects are still with us today. A few years ago, whilst watching a programme about the disaster, I remember a commentator saying that there was no birdsong. That silence was the result of an accident due to flawed equipment and human error. The birdsong can now be heard in the area.
​
As the government lockdown procedures took hold many countries in the world joined Britain in an enforced silence. There were no vapour trails from aircraft in the sky, working from home became the norm and the roads became quieter. Holiday travel ceased and businesses, medical care and public services worked in minimums rather than maximums. There were comments about clearer vision and the ability to hear sounds which had been lost due to background noise. The enforced silence produced stress alongside deeper appreciations of what we’d lost in a rat race to produce more and better.
“And there were shepherds living out in the fields nearby, keeping watch over their flocks at night. An angel of the Lord appeared to them, and the glory of the Lord shone around them, and they were terrified.  But the angel said to them, “Do not be afraid. I bring you good news that will cause great joy for all the people. Today in the town of David a Saviour has been born to you; he is the Messiah, the Lord. This will be a sign to you: You will find a baby wrapped in cloths and lying in a manger.”

“Glory to God in the highest heaven, and on earth peace to those on whom his favour rests.”
When the angels had left them and gone into heaven, the shepherds said to one another, “Let’s go to Bethlehem and see this thing that has happened, which the Lord has told us about.”
​
So they hurried off and found Mary and Joseph, and the baby, who was lying in the manger. When they had seen him, they spread the word concerning what had been told them about this child, and all who heard it were amazed at what the shepherds said to them.”
Luke 2:8-12; 14-18
Reading the story of the shepherds in the above passage we find another silence – and in that silence is the first cry of a new-born baby boy. He was named Jesus: “She will give birth to a son, and you are to give him the name Jesus, because he will save his people from their sins.” (Matthew 1:21) The prophet Isaiah, 800 years previously, wrote, “Therefore the Lord himself will give you a sign: The virgin will conceive and give birth to a son, and will call him Immanuel.” (Isaiah 7:14)
​
For many throughout two centuries joy, peace and hope, together with forgiveness, encourages us to ask the question – ‘Have you ever considered where the world would be today if that baby had not been born?’
Merle Sparkes
​Return to Home page - Merle's reflections