Lent Reflections - If only?
The reading for this reflection is taken from John 11:1-44 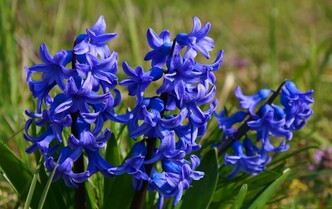 The death and burial of Lazarus must have been the ultimate devastation for his sisters Mary and Martha. They lived together in Bethany. Jesus, together with his disciples, were frequent visitors to their home where they enjoyed the safety and comfort of friendship and hospitality. Lazarus became seriously ill, and the sisters sent word to Jesus, saying “Lord, the one you love is sick.” Jesus was two days’ journey on foot from the home at Bethany and He made it clear to everyone present that “This sickness will not end in death.” (11:4). He stayed where he was for two more days. On the journey he told his disciples that Lazarus had died; there was no longer any necessary debate about the illness or how long Jesus was taking to get to Bethany. By the time Jesus arrived many Jews had gathered to comfort the sisters on the loss of their brother.
​
However, the miracle was still to take place and we are given opportunity to understand the reaction of these two sisters after an agonising wait for Jesus to answer their plea for help.
“On his arrival, Jesus found that Lazarus had already been in the tomb for four days. Now Bethany was less than two miles from Jerusalem, and many Jews had come to Martha and Mary to comfort them in the loss of their brother. When Martha heard that Jesus was coming, she went out to meet him, but Mary stayed at home.
“Lord,” Martha said to Jesus, “if you had been here, my brother would not have died. But I know that even now God will give you whatever you ask.” Jesus said to her, “Your brother will rise again.” Martha answered, “I know he will rise again in the resurrection at the last day.” Jesus said to her, “I am the resurrection and the life. The one who believes in me will live, even though they die; and whoever lives by believing in me will never die. Do you believe this?” “Yes, Lord,” she replied, “I believe that you are the Messiah, the Son of God, who is to come into the world.”
After she had said this, she went back and called her sister Mary aside. “The Teacher is here,” she said, “and is asking for you.”
John 11:17-28

“When Mary reached the place where Jesus was and saw him, she fell at his feet and said, “Lord, if you had been here, my brother would not have died.” When Jesus saw her weeping, and the Jews who had come along with her also weeping, he was deeply moved in spirit and troubled. “Where have you laid him?” he asked.”
​John 11:32-34
Life is full of consequences. When things go wrong, we can turn things back on ourselves by saying ‘If only things had been done or said differently’ or ‘If only I’d spent a bit more time thinking something through’. Perhaps we use our ‘If only’ in a critical or judgemental way to absolve ourselves from our responsibility. Perhaps more accurately we could say ‘It would have been better if I’d not been so hasty, if I’d done a bit more, kept quiet or spoken up’.

‘If only’ does give a sense of justification, but it would be better to use this phrase as a practical pointer to take full responsibility in understanding what has happened and move on so that we are better equipped to cope with the fall-out of other people’s and our own mistakes.
​
It is interesting that Jesus said to Martha “I am the resurrection and the life” (11:25) He gave her a spiritual truth concerning himself far beyond her understanding at that point in time. The miracle of Lazarus being raised from death gave the antagonists more ammunition and conviction that Jesus must be caught and put to death himself, but for the Christian it gives hope for the transition of death into the resurrected life that continues after death.
“For God so loved the world that he gave his one and only Son, that whoever believes in him shall not perish but have eternal life.”
John 3:16
Merle Sparkes
​Return to Home page - Merle's reflections