Sheep without a shepherd
​Read Psalm 23. 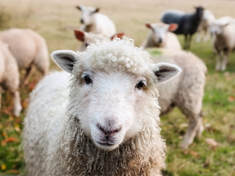 ​My son has just finished his first year at agricultural college. As part of the course he has had to work a lot with sheep. Coming from an arable farm his knowledge and interest in sheep is limited to the dinner table. Over breakfast one morning I asked him what he had learned about sheep this past year. “Mum,” he replied, “I’ve learnt that a sheep’s main aim in life is to kill itself!”

At the beginning of this year I gave myself the challenge of reading through the bible in one year. I chose a chronological bible which takes a bit of getting used to. As I read through the Old Testament it occurred to me how many of the great leaders in the Bible started out as shepherds; Abraham had large flocks of sheep, Jacob looked after his father-in-law’s sheep for many years, as did Moses. David tended his father’s flocks and kept them safe from ‘lions and bears’. Jesus is known as the ‘Good Shepherd’ (John 10: 1-21) and often used the analogy of people as sheep and church leaders as shepherds looking after their flocks (John 21: 15-17).

Sheep require a lot of looking after, as my son found out this year. They are totally dependent on their shepherd to care for them and keep them safe, to lead them to new pastures and keep them out of danger. In requiring His greatest leaders to first be shepherds I wonder if the Lord was preparing them for their greatest challenge yet, to shepherd His people. Just as my son observed that a sheep’s main aim in life was ‘to kill itself’ so it would appear that the people of Israel’s main aim in life was to ‘kill themselves spiritually’ and separate themselves from their ‘Good Shepherd.’ Time and time again their leaders intercede for them, rebuke them and rescue them from both spiritual and physical death. The leaders have a tough job, the people stray again and again, preferring to choose false idols and prophets over their one true Shepherd. (The grass is always greener…) However, without any strong shepherd to guide them the fate of the people is worse; being carried off by the lions and bears (Assyrians, Babylonians, Persians) that David had fought so fearlessly to keep them safe from.

The Shepherd and Sheep analogy is as true today as it was during Bible times. The 21st Century Church needs strong leaders, like David who will not waver when faced with ‘lions and bears', who will shepherd the people and keep them safe from spiritual death. This isn’t for the faint-hearted, the sheep stray as much today as they did in Moses time. They chase after false idols (power, wealth, materialism, fame, free love) and false prophets; in fact anyone who doesn’t want these things is seen as peculiar, a deviant in modern society. Sadly, just as in Isaiah’s time, the sheep of today are at risk of losing their identity, their uniqueness as God’s chosen people, their distinctiveness as a Christian society. Strong leadership is essential to shepherd God’s people and keep them safe. Without it we are in real danger of being swept away by contemporary lions and bears.
Jenny Basey-Fisher
​Return to Articles