The most precious gift of all 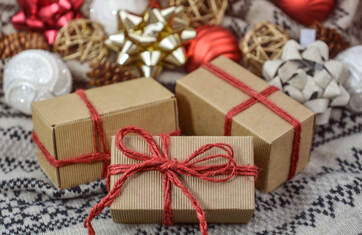 ​I remember one particular Christmas whenever my son was asked what he wanted from Father Christmas he replied. “A Scalextric”. I groaned at the thought of having noisy cars racing around a track that would take up all the space in our lounge. I reasoned with him that he might find a smaller more portable toy much better. He wasn’t going to have that and on Christmas morning even I had to feel ashamed of my reluctance when I saw the delight in my son’s eyes as he opened his Christmas present and found a Scalextric track with two cars inside.

We want to give good gifts to our children; it’s what Christmas is about - giving gifts to those we love. From September onwards retail outlets, television and radio tempt us with exciting ideas for the ultimate Christmas gift. They lure us into spending our hard-earned cash so we can see the delight in our children’s eyes as they open their presents on Christmas morning. And who wouldn’t want that - what parent doesn’t want to make their child happy?

A few weeks after that Christmas my son came through to the kitchen where I was busy getting tea ready. He looked glum and I asked what the matter was. “I’m bored playing on my own,” he said. The initial excitement of owning a Scalextric set had worn off. I really didn’t have time, I had the packed lunches to do for the next day, my older daughter to get to Brownies, my uniform to iron for work…… Then I looked at his downcast face. I left the pots simmering on the hob and went through to race the red car while my son raced the blue car.

We don’t have to give expensive gifts this Christmas, the most valuable gift we’ll ever give is ourselves. A survey by ‘Action for Children’ found that 43% of 17 – 25-year-olds who used their service had experienced problems with loneliness, and that of this same group less than half said they felt loved. According to Campaign to end Loneliness ‘The number of over-50s experiencing loneliness is set to reach two million by 2025/6.’

Jesus was born in Bethlehem to Mary and Joseph. He gave his life to those who followed him. He had time for everybody, even little children, much to the annoyance of his disciples who didn’t feel he should be bothering himself with children who were not seen as being of any importance. But Jesus said: “Let the little children come to me, and do not hinder them, for the kingdom of heaven belongs to such as these.” Giving our time to someone tells them that we value them, that they are important to us, and it conveys to the person that they have significance and meaning. In this fast-paced world time has become an expensive commodity, it has to be juggled, managed, organised and planned. Yet our ‘time’ will be the most precious gift we will ever give.
​
Christmas might be tough this year, rising inflation has seen an escalation in food and fuel prices. Money doesn’t go far. So, this Christmas, don’t worry about the material gift which will be outgrown in a few months’ time, instead give the gift of yourself which will last for eternity.
Jenny Basey-Fisher
​​​​​​Return to Home page - Articles