Certainty
​Did you hear about the man who dialled his girlfriend and got the following recording: ‘I am not available right now. I am making some changes in my life. Please leave a message after the beep. If I do not return your call, you are one of the changes.’

Imagine the waiting, the hoping, the elation when the phone rings or the creeping despondency when it remains silent.

Uncertainty. The enemy of peace. It erodes confidence and saps energy. An illness; which way will it go? A relationship; can it be mended? We like to get things sewn up. Set your goals, know where you are going. Of course, this is good – but not always possible. Life has a habit of springing surprises – some welcome, others far from it. 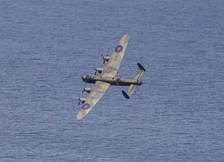 Flight Sergeant Nicholas Stephen Alkemade was a rear gunner in RAF Lancaster bombers during World War Two. On the night of 24 March 1944, the 21-year-old was one of seven crew members returning from a 300 bomber raid on Berlin when they were attacked by a German Ju 88 night-fighter. Their plane caught fire and began to spiral out of control. Because his parachute had gone up in flames, Alkemade jumped from the aircraft without it, preferring to die by impact rather than burn to death. He fell 18,000 feet to the ground below. There was only one thing that seemed certain as he sped towards the ground at 120 mph – he was going to die. But he didn’t. In fact, he only suffered a sprained leg. He fell through the springy outer tips of a pine tree, which buoyed him up, and then landed in deep snow. The Germans who took him into custody took some persuading to believe his story! They did eventually, though, and he became a celebrity prisoner.

In an uncertain world, where outcomes are so difficult to predict, how important it is to know that God is faithful, his love is consistent, and that ultimately, he holds history, including our personal history, in his hands. Christmas is God breaking into the stream of human life so that we could become certain about the things we need to be sure of. If I face loneliness, am I really alone? If I face loss, will He be there to bring His peace and comfort? He wants to be. That’s why He came.
​
What is there for us to do? ‘The Light of the World’ (1851-53) is a painting by the English Pre-Raphaelite artist, William Holman Hunt, representing the figure of Jesus knocking on an overgrown and long-unopened door. The door has no handle and can therefore only be opened from the inside. Jesus came to this world and knocks on the door of each human heart. He never forces his way in. Some leave the door firmly shut; others welcome Him in. Our response to Him determines whether we go into this New Year with the certainties that we need in the midst of the uncertainties that we don’t choose.
John Sparkes
​Return to - John's notebook ​​