'It doesn't have to be that way' 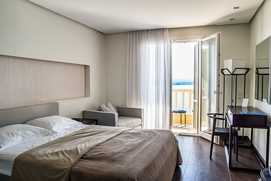 A man is alone in a hotel room in Canada. He is in a state of deep depression. He is so depressed that he can't even bring himself to go downstairs to the restaurant to eat. He is a powerful man usually - the chairman of a large shipping company but at this moment, he is absolutely overwhelmed by the pressures and demands of life… and he lies there on a lonely hotel bed far from home.

All of his life he has been fastidious, worrying about everything, anxious and fretful, always fussing and stewing over every detail and now, at mid-life, his anxiety has got the better of him, even to the extent that it is difficult for him to sleep and to eat. On this day in this Canadian hotel, he hits the bottom. Filled with anxiety, completely immobilized, paralyzed by his emotional despair, unable to leave his room, lying on his bed, he moans out loud, ‘Life isn't worth living this way, I wish I were dead!’

And then, he wonders, what God would think if he heard him talking this way. Speaking aloud again he says, ‘God, it's a joke, isn't it? Life is nothing but a joke.’ Suddenly, it occurs to the man that this is the first time he's talked to God since he was a little boy. He is silent for a moment and then he begins to pray. He describes it like this, ‘I just talked out loud about what a mess my life was in and how tired I was and how much I wanted things to be different in my life. And you know what happened next? A voice!! I heard a voice say, 'It doesn't have to be that way!” That's all.’

We may not all hear that audible voice but we can experience a moment when God breaks into our lives. We have just passed through the time when we celebrate God breaking into human history in a very explicit and powerful way – through a tiny baby. Things were a mess, politically and socially in that first century world, but God broke in. You may have your own issues and struggles as we go into this New Year – but God wants to break in. Personal challenges, circumstances that seem to conspire against us, pressures in relationships – we can try and fight on regardless but we need, like the man in our story, is to know that God can break in. What happened to that man?

He went home and talked to his wife about what happened. He talked to his brother who is a minister and asked him, 'Do you think it was God speaking to me?' The brother said, 'Of course, because that is the message of God to you and every one of us. That's the message of the Bible. That's why Jesus Christ came into the world to save us, to deliver us, to free us, to change us and to show us that ‘It doesn't have to be that way.’ A few days later, the man called his brother and said, 'You were right. It has really happened. I've done it. I've had a rebirth. I'm a new man. Christ has turned it around for me.'

God wants to break in to your life. When this man accepted Christ, his problems didn’t just evaporate. The difference was he wasn’t struggling with them on his own anymore. God was showing him the way through and giving him the strength to walk that path. When he felt under pressure, he said, ‘I think back to that day in that hotel room in Canada and how depressed and lonely and lost I felt and I hear that voice saying, ‘It doesn't have to be that way.’'
John Sparkes
​
​Return to - John's notebook