The Prince and the Peasant Girl 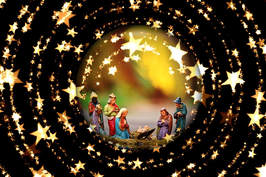 ​As we enter 2018 we are each embarking on a new phase in our journey. Perhaps you are glad to be leaving 2017 behind. Maybe you can’t leave it behind. Bad news and perhaps bad experiences have left such an indelible mark that the prospect of 2018 is daunting.

We have just passed through Christmas – a kind of pivot-point between the years. Is there anything in that story that could make a difference to 2018? Let me tell you another story.

Once upon a time, a prince wanted to find a young lady suitable to be his queen. One day, he had to pass through the poor section in a nearby village, and as he glanced out of the carriage, he saw a young beautiful peasant girl. From then on, he made a point of driving through the village as often as he could and soon he fell in love with the young lady. But he had a problem. How could he get to know her and ask her to marry him?

He could order her to marry him. But even a prince wants his bride to marry him freely and voluntarily and not through coercion. He could put on his most splendid uniform and drive up to her front door in a carriage drawn by six horses. But if he did this he would never be certain that the young lady loved him or was simply overwhelmed with all of the splendour.

No, the prince had to come up with another solution. He would give up his kingly robe. He moved into the village, entering not with a crown but in the lowly clothes of a peasant. He lived among the people, shared their interests and concerns, and talked their language. In time the peasant girl grew to love him for who he was and because he had first loved her.

That simple story was written by one of the most brilliant minds of our time - Soren Kierkegaard, the great Danish theologian. It was written to tell us what Christmas is really all about. It is a courtship – God courting us – telling us in the clearest possible way that he loves us – and loves us enough to come and live amongst us. Our response to that love matters to him.

It is easy to be cynical. I wonder, in our story, what the young girl thought of the Prince before he entered her village. Perhaps she thought he was distant, maybe arrogant, way beyond her reach. People have different ideas about what God is like – often shaped by their own life experiences. When things go wrong it is easy to question how a loving God could allow such a thing. Christmas tells us that there is Someone out there who loves us enough to come to where we are, live amongst us and die for us so that we could know his love in the midst of our struggles and pain.
John Sparkes
​Return to - John's notebook