An attitude of trust
​I was staggered to read the following facts in the January edition of the Reader’s Digest:

“More than 65 million people are forcibly displaced worldwide – of those, 22.5 million have become refugees. Seventeen percent of those people come to Europe.”

I could easily write concerning the situations in the world today which force people into a state of homelessness, for example, wars, ethnic cleansing, natural disasters such as floods, forest fires, earthquakes and volcanic eruptions, poverty and disease. The TV and social media have made it so easy for us to see the evidence before our eyes. These tragedies have always been there through the centuries, both BC and AD. 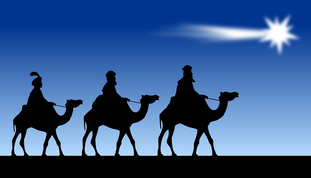 To conclude the Christmas reflections, I want to write a few thoughts concerning the visit of the Magi to see the new King. These astrologers had scanned the heavens for the sign of a long-expected royal birth. We do the same today; we scan the universe, plummet the depths of oceans, track through forests and deserts looking for signs of change so we can slow down the hastening destruction of our planet.
The wise men saw the birth of a brilliant new star and were ready to follow its journey across the heavens. The baby was already a child by the time they reached the end of their journey as the star stopped over Bethlehem. Protocol would have it that they visited Herod’s court to explain the reason for their visit. Have you ever wondered why God did not prevent them doing so?

The result of the visit was that the enemy had knowledge of God’s intentions for people, above all the liberation of the Jewish nation. It’s no wonder that Herod was terrified and put his plan to destroy the infants into practice. God, however, had his greater plan to preserve the author of the salvation of his people. We know the story well of the wise men leaving Bethlehem secretly and the young couple fleeing to Egypt to a small community of Jewish settlers.

I often try and soften the harsh realities of life for both myself and others. The truth is we often cannot prevent something from happening, and I have discovered that the phrase ‘forewarned is forearmed’ is a much more wholesome approach and has a better outcome. In this case, God let a situation unfold which was difficult for anyone who values safeguarding life and especially that of children. We cannot offer any reasonings as to why God allowed the tragedy, but we do know that those who trusted him and did not have evil intent in their hearts had the right attitude to an appalling situation and God was able to still work his purposes out in their lives.
​
This New Year we will all have our own personal fears, anxieties and challenges. The outcome of many of these might appear bleak at present, but we do have the opportunity to look beyond them and trust the author of our salvation, Jesus Christ the Messiah, God’s Son.
Merle Sparkes
​​​​​​​​​​Return to Merle's reflections 2018 - go to Reflections 2019 - Reflections 2020 - Reflections 2021