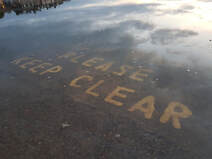 Living in East Anglia, or any part of the United Kingdom has its disadvantages when it comes to planning special events such as holidays, outings and celebrations. My son got married two weekends ago. He and his wife planned their wedding meticulously, and it was a joyous occasion for everyone. We had hoped for a still, warm, sunny autumn day but hopes began to fade as periods of rain and wind preceded their special day. The weather forecast predicted a grey but dry day. To everyone’s relief it was a gloriously sunny afternoon. However, at midnight, on our way home, it started to rain hard. By morning the area had become transformed; roads had become rivers, playing fields and the park were lakes, and the rain didn’t stop. Everything had changed, and it had taken us by surprise.

There is much waiting and hoping after a flood. When the waters subside what will be left standing? It can be quite devastating when the worst of what was feared has happened. The process and cost of throwing away, mopping up and rebuilding could well be something which would change our lives forever.

​There is a coal barn built over 100 years ago standing on the banks of one of the creeks at Thornham in Norfolk. The harbour has long since disappeared. This small barn stands as a tourist attraction today. It has withstood high tides and excessive flooding throughout the century. Its history of replenishing coal ship and housing, with smuggled goods so rife in those days, has long since gone, but its survival confirms how well it was built to withstand the onslaughts of continual flooding.

We learn to cope with the ups and downs and sometimes overwhelming circumstances that we go through in life. However, major situations can devastate us to such an extent that we become too engulfed to comprehend that we will get over them. If we are not to be taken by surprise when life throws its worst at us, we should learn from the two men in the parable of the wise and foolish builders. The foolish man built his house on shifting sand which collapsed when the storms came, whereas the wise man built his house on solid ground that remained standing when the floods came (Matthew 7:24-27). We need to be wise and build a strong foundation that will withstand the storms that will inevitably come to us in life. ​
Merle Sparkes
​​​
​Return to Merle's reflections 2019 - go to Reflections 2020 - Reflections 2021