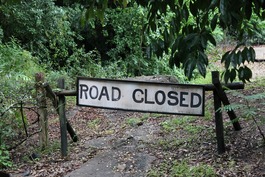 I enjoy planning detours. They have great potential. You are on a planned journey from A to B. Imagine that you find yourself not far from where a friend lives, or within easy reach of a place of outstanding beauty, of national interest or somewhere you have always wanted to visit. I see these as opportunities not to be missed if there is the time to do so.

On familiar routes, we have become aware of the times and sections which are prone to traffic build-ups. Consequently, we have become used to travelling late at night and often reach our destination around midnight. The not-so-welcome detours are a bit of a nuisance, time wasters, inconvenient and at times frustrating. Two of these detours stood between us and home after a visit to friends in Derbyshire a couple of weeks ago. On our way into Derbyshire the previous evening, on the A14, we noticed road works on the opposite side of the road with the usual long tail-backs of traffic. We weighed up the situation and decided to travel back home at night to avoid the early morning traffic congestion.

After a really good time with our friends we convinced them that 10pm was not too late to start our journey home and although we appreciated their offer of a bed for the night we set off for home. Our estimated time of arrival home was 1.30am, a little bit late but manageable.
We were still in a built-up area of street lights and houses, though admittedly on a dual carriage, when we came across the signs reading ‘detour ahead’ and ‘road closed’. We live in rural Suffolk with its country lanes and small market towns. At this late hour we would have taken the chance, ignored the signs and fully expect the workmen to have worked during daylight hours only and the road be passable. All seemed to be going well as we travelled long stretches of road between a few roundabouts. The signs kept appearing at different intervals and we continued to ignore them, that is until we did come across the roadblock. There was nothing for it but to retreat in the opposite direction to the first diversion sign that we had ignored.
​
The diversion led us off the main road onto a narrow country roads and lanes. After several miles, on a particularly narrow lane, we found ourselves travelling close behind a slow travelling Police car. We soon realised that this car was pacing two horses trotting along the verge. When the Police car stopped, two officers jumped out of the car and attempted to steer the horses into a field. The animal crisis could have been over at that point. One of the horses out-witted the officers and bolted across the road, fortunately stopping near a small copse, and after being joined by its mate, both animals settled to crop the grass. The crisis over, we proceeded on our way.

Unfortunately, some miles later, on the A14, we met another diversion which completely re-routed our journey home. If we had travelled this section of our journey during daylight hours, we would have found ourselves driving through the beautiful scenic lowlands of the Fens and through the West and Mid-Suffolk farms and countryside. As it was, we travelled through a very still, dark and frosty night. We arrived home at 3am very tired and grateful for a warm house and comfortable bed.

Had we made a mistake to have travelled during the night? The only way that we could have found out was to have returned to Derbyshire to do the journey the following morning. That would have been not only foolish but impossible, a complete waste of time and energy. We had made our decision in good faith and, although the outcome was very different to what we had anticipated, there was no harm done.

We could go into all the whys and wherefores, the ifs and buts. We could not have foreseen all the happenings of the night. Does one do so much analysing to get something so fool-proof that there is no room for error? Much of life is a journey of trusting that we will get it right and if things don’t go as planned it doesn’t mean that a mistake has been made. We put it down to an adventure waiting to happen to the unsuspecting travellers. A story worth telling.​
Merle Sparkes, February 2016
​​Return to Merle's reflections 2016