Don't get caught out
​I was found out a couple of weeks ago and thankfully a gracious husband bailed me out of what could have escalated into a disaster for this year’s back garden. It was not so much what I did not see, but what I did not do.

During the last spell of arctic conditions, the garden froze and the snow and frost painted a beautiful scene of glistening white everywhere for 5 days. It was on one of the trudges across the frozen back lawn to make sure that the seed in bird feeders was flowing properly, and to scatter seed on the ground, that I caught sight of what looked like a new grassy area behind the woodshed. Now that was unusual, for this hidden part of the garden was pebbled and housed two large water butts, the wheelbarrow and a large length of coiled hosepipe. It should have been a tidy, weed-free, out-of-sight storage place. The ‘lawn’, on closer inspection, consisted of tiny matted weeds whose white flowers were on the point of flowering. What a disaster! The weeds, though originally weeded from the adjacent flower garden in the late summer, were on the point of beginning their migratory journey across the garden. Why shouldn’t they? The conditions were ideal. Sheltered from adverse weather conditions and left to their own devices they had a freedom to do so. I had no choice but to confess that I had been found out and was most grateful for the offer from my husband to bail me out. Even an overhanging wild blackberry branch from a neighbour’s garden was removed. The restoration to the original was good to see.
​
Where had I gone wrong? I had neglected to walk round my garden, not only to enjoy it, but to make sure that there were not areas that need some TLC before the winter set in. What a chump I had been. As much as this particular weed looked lovely, especially from a distance, it was a nuisance as once it took hold it was difficult to get rid of. It should have been well and truly rooted out again in the late autumn. I had also got immersed in other things which I considered to be more pressing as the autumn gave way to winter. Hence, I had missed some of the areas of the garden which still needed attention if there was going to be a good start to the new year’s garden. Yes, there were a couple of unattended other areas. 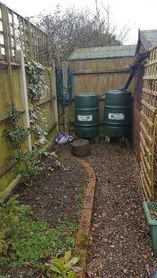 We fall into so many traps. We put things off, placing what is least pleasant or too time consuming at the bottom of the pile of things to be done. Excuses come thick and fast such as, ‘I didn’t hear you say that’ or ‘when did you say that?’ or some such equivalent variation to express our lack of application or dare I suggest it, our tendency to procrastination. We can also have ‘something wrong’ with our sight to cause us to not see the obvious! No wonder we drive ourselves, and those who bear the brunt of our audio and visual impairments or laziness, to varying degrees of frustration!

The difficulty we have is our inherent defensive abilities which become our solid mechanism to remain as we are rather than to determine to break through into a much more pliable and reasonable place. This new position would enable us to feel the effect we have on someone else when we string out our refusal to hear, see or do what we, or others, expect of us. I found myself out. No one in my household would have realised the impact the weed patch behind the woodshed would have on the rest of the garden as it seeded and spread as I, the gardener, would have done. At this stage those weeds looked, from the distance at least, just like a fresh green lawn. What deception! It begs the question of those who say that they had not seen or heard what they were expected to do as to whether they really knew all along what stance they were occupying? Do the answers which roll off the tongue so easily cover up for an attitude of ‘I couldn’t be bothered to’, or ‘I had no intention doing what was wanted’?

In the final analysis, we need to apply ourselves to hearing, seeing and doing the obvious to enjoy a different way of life where people matter. There we discover that a completed job done well is satisfying; and above all, a life without constant, frustrations and aggression is less stressful for everyone.
Merle Sparkes, February 2017
​Return to Merle's reflections 2107 ​