Down the drain
​​Save the planet whether it be by protection, conservation or going green. The response is phenomenal. We hold global conferences, draw up alliances, form societies, sign petitions, encourage voluntary and financial benefactors alongside educational programs to promote awareness of the depletion of, or changes in, our planet’s ozone layer, weather, food and water, coal, oil and mineral resources. We rely on these to sustain life. We have even sent fact-finding space missions to the planet Mars to see if life as we know it is sustainable on a different planet. We appear to be making a fairly acceptable effort to improve the situation we find ourselves living in at the beginning of the 21st century. 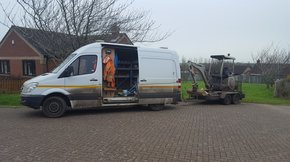 However, the inhabitants of half a dozen bungalows at the cul-de-sac end of the road where we live were bewildered by a decision to leave a burst water pipe fractured for four days over the New Year public holiday weekend. We woke up to find a narrow, fast flowing stream at the bottom of our driveways gushing up from the pavement in front of one bungalow and, using the kerb to steer its course, it flowed past three driveways before disappearing down the storm drain at the top of our driveway. All our concerns and reporting of the burst pipe came to naught. The two-inch diameter of the pipe meant that the fracture was not considered to be an emergency. Therefore, the pipe would only be mended after the bank holiday!

Four days later, two vans, a loader transporting the digger, and a gang of workmen arrived to repair the pipe. The work was done at the end of the day under spotlight. One week after that the repairs to the damaged driveway and pavement were started, and yet another week later the final few bits of damage were completely repaired. There is still a small section over the fracture site that has four cones blocking it off. As can be imagined there was criticism at the waste of water and quips concerning the leaflets put through our letter boxes encouraging us to save water. Some things just don’t seem to add up when they are scrutinised under the microscope, do they?

Seeing that water pouring down the drain set me thinking of all the things that can do go down the drain. I do not know what caused the pipe to burst, but I do know that very often the reasons for wastage are quite obvious. We have just celebrated Christmas. Did we buy too much, receive unwanted presents, spend too much and do we feel the pinch as a result? Have we looked back with regret to a wasted education or lost job opportunity? Have we thrown away a good relationship through foolishness; recklessly spent a hard earned wage packet or inheritance? Maybe it is easier to squander than to save and because of this we end up with guilt, or sadly a ‘don’t care’ attitude, brought about by foolishness. Perhaps, as we go into this New Year, we can ask ourselves if we are allowing our personal resources to go to waste. Not just physical possessions but time, energy, abilities and the gift of life itself.

Many disasters require investigations, the putting in place of immediate stop-gap measures and planning for long-term maintenance. Very often a reminder of what has happened lingers on into the future. There may be a lesson for the learning – perhaps to operate within certain guidelines, set manageable deadlines, keep up safety checks. Yes, of course, circumstances entirely out of our control can occur at any time through no fault of our own.

A tidal mark of orange - yellow sand remains visible where the water coursed its path to the storm drain. The extent of the mark would have been much less had the burst pipe been repaired sooner. How much less water would have been wasted?

Allow the things that have gone wrong, or been wasted, to act as reminders of how it can be different in the future. We can use guilt, or the memory of a former lack of courage, to pick oneself up and start again or set things in place so that future disasters can never happen again or if they do with a minimal drain on resources.  ​
Merle Sparkes, January 2017
​Return to Merle's reflections 2017