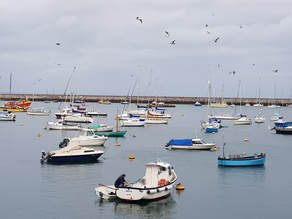 Imagine an artist’s canvas with a backdrop of the sea on the righthand side and the land on the left, the central eye-catching feature being the shape of a capital ‘C’. The sea is dotted with red-sailed fishing boats in the south and modern marina craft in the north. The coastal plain rises up into the granite mass of Dartmoor to the west.

The coastal town of Torquay nestles at the top of the letter C and at the bottom the 14th Century fishing harbour of Brixham is protected at its southern tip by the high promontory of Berry Head. The shape of the letter C is artistically decorated to illustrate modern Torbay, aptly defined as the English Riviera, going southwards showing sandy beaches, long promenades and busy harbours to end finally at Brixham harbour. The compass markings at the bottom left hand corner show us that Brixham is protected from the southerly gales and storms by the massive rocky promontory of Berry Head that juts into the sea and the high moors and peaks of Dartmoor to the west. However, there are no land masses or rocky headlands to protect the exposed sea-flanked coastline from the cold winter storms that batter the front during the winter months.

We spent our late summer holiday on Dartmoor. With poor weather in the mornings we decided to spend our days exploring Brixham. It was fascinating exploring such a small town, whose records date back at least as far as the 14th Century, and which in 2014 had a fishing industry worth £24 million. Brixham remains one of the important fishing ports in the land. Records span back through the arrival of William of Orange on 5th November 1688 to the first and second world wars. The top of Berry Head boasts the shortest light house of the land, standing at 6 feet, a bird reserve and the remains of one of the numerous forts built by King Henry VIII to protect England from invasion by sea-farers.

​Not only were the inhabitants exposed to the possibility of invasion, they were exposed to the weather systems from the East and North-east. On 10th January 1866 one of these storms battered the harbour. The following is a precis of a newspaper report in the Illustrated London News: 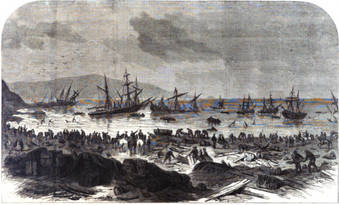 This image may be used without prior permission for any scholarly or educational purpose. © Hathi Trust Digital Library and The University of Michigan Library. victorianweb.org.
​"Torbay was unusually full of ships since the squally weather had obliged many vessels to put in there for shelter. The afternoon, indeed, was so calm that many vessels resumed their voyages; but they had not proceeded far before the appearance of the sky induced them to return. Other vessels that were either going up or down the Channel, being similarly warned, followed the example; and consequently, towards the evening, no fewer than seventy vessels, a great number of them foreign, anchored in the bay, a short distance in front of Brixham Harbour. Just as darkness set in, a stiff breeze blew from the south-west, accompanied with heavy showers of rain. Towards midnight the wind veered round to the south, whilst the rain continued with unabated fury, falling in “sheets” rather than in drops. Within a very short time eleven or twelve ships were washed ashore on Broadsands and the rocks adjoining. The wind now suddenly changed with increased rage to the north-east, and, to the great horror of those on shore and amid the shrieks of those on board the vessels, they were tossed against the pier and rocks along the coast like so many toys. As soon as the light of the morning returned, the whole of the coast between Broadsands and the pier at Brixham was found to be covered with wrecks lying in indescribable confusion—in some instances one over another."

Fifty vessels were wrecked and more than 100 lives lost in the storm.  ​ 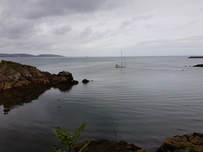 ​The building of an additional breakwater to the harbour wall had been started in 1843 but it hadn’t been completed. Because of this the boats were exposed to danger when the wind changed. Now there was a greater incentive for its completion. After a series of ‘fits and starts’ due to lack of funds and lack of initiative it was finally completed in 1916. The wall extends from the sea end of Berry Head half a mile out into the bay, making a pleasant walkway, an ideal place for rod fishing and has given the opportunity for training for life-saving skills, scuba diving, sailing, canoeing and kayaking. A light-house at the end of the wall gives clear guidance and warning to all the maritime vessels.
​
I walked the breakwater regularly during my visits to Brixham and reflected on the success and failure during its construction. The wall was built to offer guidance, safety and protection to all who entered the harbour. I also realised that there were two lessons to be learnt from the building of this wall which we could apply to ourselves in this very modern, different 21st Century.

​How many storms were weathered during the years it took to complete the breakwater? The destruction by the 1866 storm is recorded in the history books. The villagers brought everything they could burn to build a huge bonfire to light up the shore for those struggling to get to safety. In the morning, the beach was littered with the wrecks and the bodies of those who had lost their lives. The breakwater had been started 23 years earlier – if only it had been completed it might well have avoided the extent of the tragedy that unfolded that stormy night. I wonder if we unwittingly allow ourselves the licence to become slack or complacent in what lies in front of us. We cease to plan, keep a check on the finances and lose the incentive to overcome the difficulties or resolve the problems that occur along the way. We collapse or become side-tracked and what we should be doing grinds to a halt.
​
There are always consequences to how we do or do not conduct ourselves. Most of the time we remain the victim of our own folly but sadly that is not always the case. Those family members, work colleagues and friends who shelter under our umbrella may well fall flat on their faces too. It is so important to deal with the more vulnerable and exposed areas of our lives as soon as we become aware of them rather than burying our head in the sand. We can hope, in vain, that all will be well when the storm clouds gather and break. Life doesn’t just fall into place, it throws up things which we have to deal with, things we have to put right, start over again with and make more secure. Perhaps we need to apply some reinforcements to what might already be working well. In other words, we need to grow, become solid, learn from our mistakes and what works well so that we can make good decisions and feel good about ourselves. This will help others to feel safe when they are with us.
Merle Sparkes, September 2017
​Return to Merle's reflections 2017 ​​​​​​