Given a chance to recover 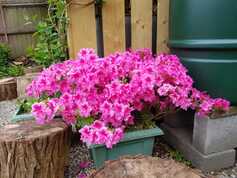 Twenty years ago, I discovered a flower pot in my sister’s garden, lying on its side, half-filled with soil with a rather neglected azalea in it. My sister, who was terminally ill at the time, was more than happy for me to rescue her plant. We were both keen, but very different, gardeners. She enjoyed the exotic looking tulips and wonderfully scented roses, whereas I enjoy cottage garden flowers and shrubs. Every year during the month of May this Azalea has given a wonderful display of pink flowers.

I confess that, although the azalea is now growing in a nice large flower pot, it looks after itself. I just make sure that it’s watered with rainwater in drought conditions. It does not get TLC and is trusted to survive on its own merits.

That said, when it came into flower this year I realised that, in the twenty years I’ve looked after it and the ten years approximately that my sister had owned it, it’s done extremely well. Thirty years!

Occasionally in life, something will register, and we will have the choice of whether we get involved or not. It could be anything, for instance, something needs mending, redecorating or protecting. In the case of people, giving someone a chance, baling them out, giving some space, advice or sticking with someone while they re-establish themselves. Some situations might be more challenging than others, but the onus will be on us to do what is right with whatever is needed. Failure to get involved, do our bit or to stick with something to the end is unacceptable. We should be true to what we believe.
​
My sister’s rescued Azalea has survived and has established itself really well. No doubt its roots are travelling along the shingle the pot rests on and I’ve yet to prune it. It brings a lot of joy as it flowers so early and gives way to a brighter array of colours as May turns into June. There is always a ‘what if’ in life. For example, what if it hadn’t been rescued, been re-potted as it needed and watered in drought conditions. It wouldn’t have survived, and it wouldn’t look so good. The responsibility from beginning to present day has been mine because its original owner could no longer do it. I made a good choice, brought happiness to someone who deserved it and gave a chance to something that couldn’t help itself. Life is full of opportunities and challenges. We choose every day between involvement or non-involvement. May today’s choices be the right ones for the benefit of others.
Merle Sparkes
​​​​​​​​​​Return to Merle's reflections 2018 - go to Reflections 2019 - Reflections 2020 - Reflections 2021