Hope and the New Year
It was dark when we left the Delamere Travelodge on the M4 at 6.30am this morning. Our destination tomorrow afternoon will be Cornwall to spend the weekend with my son and his family. It will take us 2 hours to reach Whiddon Down, on the northern edge of Dartmoor, for breakfast and then a much looked forward to day on the moors.
​
It was not long before we left the westbound M4 for the southbound M5 for Dartmoor. The scene that unfolded before us, as night gave way to day, summed up my thinking for the first Reflection of 2016. The underlying question I have had for a number of weeks is how do people in distressing situations cope with the anticipation of the New Year when they will be living with the aftermath of what happened to them in 2015? 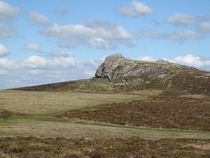 As the dawn broke, the dark night sky in the east took on a shade of pale blue, which lingered for a long while. Clouds flitted across the expanse of clear skies and I must admit I was disappointed at the thought of the rising sun being hidden by the gathering clouds. How wrong I was, for the blazing, bright ball of a yellow sun and pink horizon soon appeared. Do you, as I do more often than not, prepare myself for disappointments which never happen? On the western side of the motorway however, a far different scene had unfolded. The sky was completely covered with rain clouds, and ominous raindrops mixed with wet snow spattered the front screen. Oh dear! All seemed to point to a bleak, wet day on the moors. The depressing thought was soon squashed. As we changed direction slightly, a rainbow appeared and touched down on the hills of Dartmoor. The snow that had fallen overnight was transformed into pretty, pastel shades of the rainbow’s colours.
So much of the news over recent months has left us with images of cruelty, awful human suffering and deprivation. We might be walking our own path of pain even now. The future seems so bleak for so many, and yet, I believe we will also always see acts of human kindness and resilience amidst the darkest deprivation and pain. I also believe that life is not always the bed of roses that we would want it to be. A rose too, needs tender loving care as well as pruning to blossom. Life may not turn out as we would want it to, and what we have so cherished and worked so hard for might well hang in tatters around us.

I appreciated a documentary which I saw recently. In it, a father says to his young daughter who lost her sister in a shooting tragedy, ‘hate will gradually eat at your heart and destroy you’. The message of the tragedy was the ability to allow love to replace hate so that there could be  forgiveness. Hatred and its counterparts, such as anger, bitterness and revenge don’t allow us to pick up the pieces and move on. We so often end up in the same place don’t we? Are we going to rise up and be overcomers or wallow in the mud, live with antagonism or walk away and live again? Will we desire to bring about changes within ourselves or better the lives of those around us? Defeat will never be the answer. Deep within us is the capacity to love, bring comfort and hope and to build again.

‘And hope does not put us to shame, because God's love has been poured out into our hearts through the Holy Spirit, who has been given to us’ (Romans 5:5).
Merle Sparkes, January 2016
​Return to Merle's reflections 2016