Easter reflections - How do you respond to a crisis? 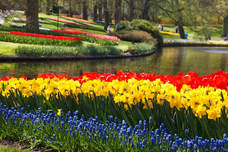 It’s all down to how we look at things. The arrival of Spring in England has come at last. Daffodils of varying varieties and sizes have given a wonderful golden hue to our gardens and parks. It makes us feel better and lifts our spirits to anticipate the English summer. However, we are still recovering from some dark and difficult winter days. Some folks have suffered from unexpected crises, such as long-drawn-out winter flu. Politically and nationally others are suffering from tragedies, such as the Kemerovo shopping centre fire in Russia and the poisoning of the Soviet spy in Salisbury. The winter influenza is expected, and vaccines are available; the fire and poisoning unexpected.

The poisoning of Sergei and Yulia Skripal will soon fade into history. However, the first Easter is still at the forefront of church celebrations at this time of year. The celebration of the Jewish Passover was an established religious feast. We can recall the disciples’ concern that there would be trouble in Jerusalem (John 11:8) yet only Thomas voiced his determination to accompany Jesus to the feast (John 11:16). How often, when a crisis is anticipated within the family, is there a difference of opinion as to how it should be handled? It only takes one person to raise an objection or to be prepared to face up to the reality of the situation for things to degenerate into a confrontation.

The disciples decided to face the challenges and accompany Jesus to Jerusalem. The majority prediction of trouble was realised. At the end of a difficult week the incited crowd called for the crucifixion of an innocent man and the release of a criminal. It would appear at first sight that the crucifixion of Jesus was an unforgivable mistake.

The disciples each reacted to the horrendous death of their master differently, according to who they were. When push came to shove Peter denied Jesus, the rest of the disciples ran and hid in fear for their lives and Thomas disappeared into thin air, which meant that he missed the first appearance by Jesus to his disciples. We could all have reacted similarly; this is the negative side of human nature.

The positive side is the care and concern of Jesus for his mother. He chose John to look after her, as he knew that John would care for her as he would his own mother and that Mary would accept John’s care as that of a son. How often are we privileged to see the love of someone who’s suffering being shown to those they love or care about, rather than wallowing or complaining bitterly about their lot in life.

We can also admire the courage and loyalty of the women who went to embalm Jesus’s body at first light. How often do we see ladies, often a mother or a sister or a friend, gather themselves up to ensure that the right thing is done? There is also the danger of running away from pain emotionally. Mary stayed long enough for Jesus to meet her at her point of greatest need.
​
Some crisis situations create an opportunity, not only for us to care for others, but also to receive care from others. Crises will always be part of life, each one evoking a different response. We can use any crisis to allow good to prevail, rather than self-pity, resentment and revenge.
The Easter story, horrendous as it was, brings hope and breaks down the barriers caused by sin and hatred.
Merle Sparkes, March 2018
​​​​​​​​​​Return to Merle's reflections 2018 - go to Reflections 2019 - Reflections 2020 - Reflections 2021