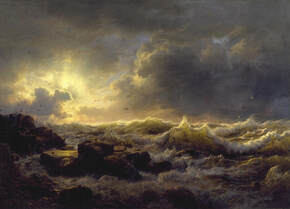 ​I was saddened to see the effects of the cyclone which devastated Mozambique and parts of Zimbabwe and Malawi on Monday. As the English spring arrives we look forward to the end of the huge storms that have battered the South West and western coasts of the country. It’s disturbing to see how much the changing weather systems are having such an adverse effect on the planet.

The ladies have set aside time during this year’s period of Lent to study parts of the Easter story from the gospels of Matthew, Mark and John. At our first meeting we looked at the miracle of Jesus walking on the water. I have extracted one of the thoughts that was shared for this reflection.

We asked the question, ‘Why did Jesus wait until some time between 3.00am and 6.00am to rescue the disciples?’. The previous evening had seen them battling against the wind. They had rowed three and a half miles to the middle of the lake before he walked towards them. It was a dark, tempestuous night and they were terrified. No wonder they thought he was a ghost! How would we have felt if he seemed to be passing by without seeing them?

We all agreed that we prayed and, at times, pleaded with God for him to rescue us from our plight. However, we can be so petrified that we don’t recognise the help when it arrives. We can be tempted, just as Peter was, to rush in without taking stock. He found himself walking on the water to Jesus and Jesus would have kept him safe, that is until Peter took his eyes off Jesus. The full impact of the storm hit Peter and he began to sink. Jesus did rescue Peter and then faced him with the effect of his distraction. It’s one thing to say we trust but another to persevere. It is so easy to fall at the last hurdle. There’s no room for complacency.

Jesus meets us where we are. The disciples were frightened, tired and disillusioned (their hearts were hardened Mark 6:52). Jesus had called them to follow him. Most of the time these twelve men became part of a huge crowd of followers and, at times, it all became too much for them. The miracle of Jesus walking on the water rekindled their appreciation of Jesus, their master. In the tough times we can trust him to be there for us.
​
The miracle itself encourages us on a personal level. However, it is important for us to be mindful of those who are suffering throughout the world today and might not be able to be given or to receive the perfect help of the disciples on that night. We cannot live in a spiritual bubble.
Merle Sparkes
​
​​​
​Return to Merle's reflections 2019 - go to Reflections 2020 - Reflections 2021