Easter reflections - Loving to the end
Read carefully this powerful passage from John’s gospel. Try to imagine yourself in the situation:

‘It was just before the Passover Festival. Jesus knew that the hour had come for him to leave this world and go to the Father. Having loved his own who were in the world, he loved them to the end.  The evening meal was in progress, and the devil had already prompted Judas, the son of Simon Iscariot, to betray Jesus.  Jesus knew that the Father had put all things under his power, and that he had come from God and was returning to God; so he got up from the meal, took off his outer clothing, and wrapped a towel around his waist.  After that, he poured water into a basin and began to wash his disciples’ feet, drying them with the towel that was wrapped around him. He came to Simon Peter, who said to him, “Lord, are you going to wash my feet?” Jesus replied, “You do not realize now what I am doing, but later you will understand.” “No,” said Peter, “you shall never wash my feet.” Jesus answered, “Unless I wash you, you have no part with me.” “Then, Lord,” Simon Peter replied, “not just my feet but my hands and my head as well!”  Jesus answered, “Those who have had a bath need only to wash their feet; their whole body is clean. And you are clean, though not every one of you.”’ John 13:1-10 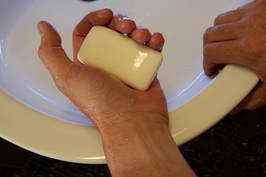 Jesus’ final preparation for returning to His Father was to invite the disciples to spend the Passover meal with him. Jesus prepared it down to the finest detail. The occasion was to be a private time with the people who mattered most to him. He prepared it knowing that his time to leave this world was near at hand, that Judas had already accepted the scribes’ request to betray him and that Peter would deny him. Yet he could say from his heart that he loved them to the end.

Difficult times can lie ahead when there are family partings, for whatever reason. Some of us have already experienced this. Unbeknown to them, the disciples were about to enter a new era in their relationship with Jesus and their future without Him in a physical form. Although they felt safe with Jesus, their faith in Him was about to be tested. These men were aware of Jesus’ complete acceptance of them - no matter their mistakes and weaknesses.  James and John, who constantly bickered and argued as to who should have top place in the pecking order among the twelve; Judas, who couldn’t be trusted and accepted a bribe to betray Jesus; hot-headed Peter, who acted before he thought; Thomas, whose loyalty became his weakness when push came to shove as he fled from the horror of the cross. Just as we are, they were all very human.
​
Who should have been washing who’s feet? Jesus took it upon himself to take up the servant’s role and do the foot-washing task Himself. How would we have reacted if we were with the disciples? Not let on that we had accepted a bribe to undermine our host as Judas had; in other words, cover up what we really feel and pretend that all is well when it is not? Completely miss the point as Peter did because he didn’t stop long enough to hear with his heart what was being said and jump to the wrong conclusions too quickly? Let yourself down at a later stage when your world falls apart as Thomas’ did when he ran from the crucifixion? Despite all, Jesus’ love remained faithful, non-judgemental, unaltered, forgiving, understanding, graciously showing and teaching a better way so that we find an acceptance that can be trusted.
Therefore, I find myself left with a challenge. What does it mean for me to love someone ‘to the end’ or as one translation puts it, to show ‘the full extent’ of my love? What does my ‘feet washing’ look like in practical terms for the people the Lord has called me to serve? In what practical ways are you going to ‘love to the end’? This final verse puts it all into context.