Making time
The longest day of the year is 21st June, 8 days ago. During the past few weeks a quiet change has been taking place in our gardens and countryside. The new luminous tree leaves of the spring have changed to a darker, older green. Previous frenetic activity in the gardens has taken on a slower pace. The later spring and early summer flowers have gone or are going past their best, leaving a pause before the buoyant summer flowers come into their own. ​ 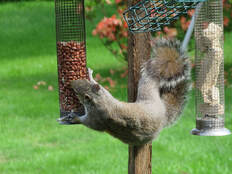 As a sequel to the previous reflection ‘Growing up’ I will share some of the amusing and alarming events in my garden over the past few weeks. The highlights have been to see the antics of the fledglings and one particular incident comes to mind. A tiny sparrow was chasing a small butterfly around the garden. It was just like watching children playing a game of catch. No matter how hard the assailant tried to catch its victim, each lunge ended in failure. Another incident of a more alarming nature was to find a squirrel prostrated upside down on one of the bird feeders. Squirrels haven’t visited my garden for years. We discovered that the rapid rate of emptying the bird feeders was due to the audacity of one huge crow, some pigeons and a blackbird who had learnt the art of feverishly flapping their wings to keep them airborne long enough to eat the seeds. This was incredibly amusing to watch, though frustrating for the birds who could only look on helplessly as their food was devoured and for the pockets of the owners who bought the seed.

The crows and a pair of sparrowhawks have found a ready larder of nestlings and our sadness in the autumn, when the leaves have fallen, will be to find a bird’s nest with unhatched eggs because the owners have also fallen victim to these larger scavengers.

I couldn’t help but relate it to ourselves. Are there times when we’ve been robbed of all that we’ve planned and worked for? Life can be fraught with difficulties, either unforeseen or anticipated. They may be personal or professional, could be illness or bereavement, disappointment, failure or frustration. Whatever the cause, all our hopes and dreams can be dashed and somehow the enjoyment of simple pleasures gets lost. I always admire the tenacity of the birds as they never give up. They will rebuild a nest, lay more eggs, look after their young and quickly fly away when disaster strikes. There is an empathy as the birds descend into a respectful silence should a sparrowhawk kill one of the tamer species, very often a blackbird. Birds have a wonderful alarm system – when danger approaches their warning call goes out. They look after each other. Another example for us to learn from.

Will we take the time to enjoy the lazy days of summer, should we be spared the rain in the UK? The migratory birds and their young make the most of the long days of summer, they will be fattening themselves up to store up energy for their several thousand-mile journeys to warmer climates. That is good common sense. Will we come to the end of the summer with regret, saying it’s gone so quickly and there was so much we were going to enjoy but haven’t made the time for?

A further amusing, but alarming, episode caused by seagulls dive-bombing a school playground was recounted by Jen - click to read about the 'disruptive seagulls'.
Merle Sparkes
​​​
​Return to Merle's reflections 2019 - go to Reflections 2020 - Reflections 2021