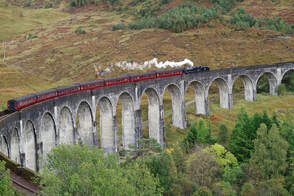 Does the end of 2019 and the beginning of 2020 fill you with excitement or the conclusion that it couldn’t get any worse? Would it be fair to say that there has been much ado about the state of the planet, political unrest worldwide and an anticipation of possible political stability here in England? It would be very easy to stand on the side-lines with a ‘wait and see’ attitude.

Recently I was an armchair observer, alongside others on site, of a magnificent view of the Glenfinnan Viaduct. The viaduct is 1200 ft long, 100 ft high and comprises 21 arches. Although I didn’t have a camera, 60 tourists were waiting, cameras ready, to snap the best views of the Jacobite steam locomotive as it came into view. Normally, there would have been a handful of railway enthusiasts waiting with their cameras ready. The attraction today is to see the original route of the Hogwarts Express in J. K. Rowling’s’ famous Harry Potter series. The conductor of the train commented that the cameras outside would be clicking to take pictures of the train and the passengers inside the train would be trying to capture the view of this scenic route from Fort William to Mallaig in Scotland. Two things were going on from different angles – the passengers were being viewed by the tourists, and the tourists by the passengers. In life we might feel that we are watching the world but, in reality, the world is also watching us and so conversations and their outcomes, promises kept and broken and behaviour and its consequences are all observations in parallel. 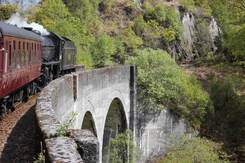 I observed a lot from watching this programme of Scottish scenic routes. Life is a journey and, if we consider ourselves as travelling on parallel lines on a railway, we are given examples of keeping our destination in sight. The carriages of a train need to be pulled or pushed. If there’s a steep prolonged incline two locomotives might well be used to keep the momentum going, preventing carriages slipping back, a derailment or a collision. Sometimes we balk when we feel it would be easier to give up, but we might need the extra push or pull to keep us going. The second locomotive could well be at the back of the train pushing or joining the locomotive in front with the pulling. Sometimes it’s not good to try and prove to ourselves and others that we can go it alone.

Sometimes, whether intentionally or unintentionally, we find ourselves at the end of a line. The only way out of this predicament is to be pushed back to where we misread the pointers of the signal to find ourselves in this embarrassing and awkward position. Hopefully we can appreciate the humorous picture of an engine at the front of the train but facing the guard’s van to push us onto the main line again. Not much room for pride is there!
​
The New Year will give us the opportunity to start again, for example to rekindle our trust, to have faith that things will work out for the best and to take the opportunity to put right mistakes and misunderstandings.
Merle Sparkes
​
​Return to Merle's reflections 2020 -go to Merle's reflections 2021 - Merle's reflections 2022