Not as it seems 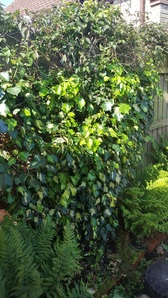 ​I fully accept that when I get things wrong, intentionally or unintentionally, there are usually consequences. This eventful episode in the garden highlighted how, even though I consider myself a good gardener, I really did get something wrong.

Ten years ago I moved a large green and yellow-leafed ivy to what I thought would be a better place in the garden. The moving of a mass of intertwined ivy stems was quite a marathon. The root ball dug up, I laid the plant on the lawn and carefully unravelled the tangle. That done, I folded all the stems neatly and shifted it all to a corner of the back fence. It took quite a time to replant it, plait and bind the stems up the concrete fence post and trim it to a more reasonable height. The overall affect was good and I walked away with a real sense of achievement and great expectations for a thick colourful corner display to replace the drab brown of the fence.

This year we had more gales during the winter and early spring than usual. The garden takes quite a battering during these times. This year the sturdy back fence seemed to come adrift in the same corner as the now rather spectacular ivy was growing.  The fence waved like the waves of the sea with each fresh blast of the wind and I had visions of it collapsing backwards into one of the neighbour’s gardens. When the gale was over the fence was still standing upright, although it was out of line with the neighbour’s adjoining fencing at this corner.

It appeared that a post that should have been at this particular corner junction had disintegrated. The neighbour promised to look at it herself and so the matter was dropped. I had a little niggle that we had missed the problem so went to have a closer look. I peered through the thick foliage and there stood the four-inch concrete post that I had wrapped the ivy round. I traced the ivy stems down to the base. Imagine my consternation when I discovered wonderful, thick, rope-like branches not only trekking up the pole but also in the direction of three right angled fence panels. I am sure that you will agree that I was the culprit. I would never have realised the strength of those stems to do that amount of damage which included breaking the concrete post at its base.

It was decision making time! My husband and I set about cutting down the ivy to release it from the pole and retrain it sensibly. What to do about securing the fence was a more difficult problem to solve? It would take a day’s work to dig out and set another post in the concrete and there is not enough space to put the post anywhere else without demolishing an established cotoneaster. We asked the advice of a friend who was a builder by trade. He fixed a strong angle bracket to the thicker, parallel wooden bars of the fences and then informed us that the builders had probably snapped the concrete post when it was put in and had hoped that all the fences at right angles would hold everything in place. The ivy was not the cause of the damage and I was not to blame.

That corner of my garden is rather colourless and bare at the moment. What a shame that I blamed myself so readily and was so quick to cut the ivy down! The ivy could well grow again, but it will take a long time to reach its former glory. If only?

I wonder how many times I find it easier to blame myself for something which, if I took my time to consider other possibilities, I would realise was not my fault at all? Do you do that? No one took the blame for blame for breaking that post. It was a cover up! Many years have passed since the truth was discovered. Unfortunately, not only did the wrong person take the blame as I did - I suffered the consequences in cutting down that ivy. We do ourselves harm when we take the blame for what is not our responsibility, and we fail to help others face their responsibilities when we take everything upon ourselves.
Merle Sparkes, June 2016
​
​Return to Merle's reflections 2016