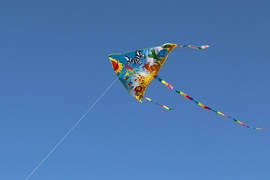 ​By the time I got to Southwold to spend a morning on the beach, the doggy walkers had gone and the keep-fit enthusiasts had finished their early morning swim in the sea or jog along the prom. It was a perfect day for the beach. The sun, which rises across the sea, was not very high in the sky and its rays caused the water to sparkle and shimmer; there was not a cloud in sight, and a gentle westerly wind promised to have a cooling effect once the midday temperature soared. I enjoyed a cup of coffee with a friend, went for a walk and then settled down to read, do a puzzle or two and just generally enjoy watching the early holidaymakers. There was still one week to go before the official school holidays began, so the families on the beach were nearly all young couples with small children. Most of the older generation were sitting on their deck chairs on the prom or verandas of the beach huts to escape the heat of the sun.

I became thoroughly absorbed with the activities on the beach. As the sun rose higher in the sky, so the bright gleam of the sparkle and shimmer gave way to a clear blue sky and an inviting sea with small white crested waves. Swimmers strode into the water with great confidence, and hesitant children squealed as their toes got wet. Some of them turned and fled to safety by taking a flying leap into a  parent’s arms and some tripped over their feet in their attempt to reach dry sand. Wonderful sand castles surrounded by elaborate moats, stone entrances and designer flags flying were all in the making. One thing stood out to me. All the dads were involved with their families. Was this involvement as it was Monday morning, early on in a week’s holiday, or because these were young families, where the joy of being a dad was still something to be proud of and where the novelty hadn’t worn off.

On many, many an occasion I have seen a mum standing at the water’s edge supporting a child on her hip and holding the hand of another child as they braved getting their feet wet. I always feel a pang of sadness when I realise that a dad is on the beach - present but not involved. A boy or girl runs up to a parent, grabs an arm or leg to pull them to their feet to come and play, only to be ignored. Many times a disappointed and crestfallen child slowly walks away to amuse themselves once again. We miss so many wonderful opportunities of family togetherness when we remain on the safe ledge of uninvolvement or fail to register that a partner or child is in need of help or fun. To be fair, dads and mums can both fall into the trap of lack of involvement.

My greatest joy this morning came from watching two brothers try to get their kite airborne. I don’t know much about kites but thoroughly enjoy watching them swirl in the sky and appreciate the sense of achievement when they become airborne and fly. Time and time again these two boys ran past me. One on the prom holding the kite, the other on the sand in front of him as they trusted the wind to get behind the kite and lift it into the air. Most of the time the kite quickly plummeted to the ground. Not a cross exchange took place as, in their disappointment, they tried to succeed. On the couple of occasions when the kite became airborne for a few minutes, there was great glee. I wondered whether the kite needed a tail to stabilise it and the lad with the strings needed to be shown how to tighten and release them to keep the kite rising to catch the air currents. If only someone with experience had been there to help them solve their problem of ‘why won't the kite fly?’ Probably a beach with families playing on the sands was not the safest place to fly a kite. They were not to know that though were they? I appreciated the attitude of these two brothers. There wasn’t any ‘fed upness’. None of the onlookers saw one brother lording it over the other with ‘give it to me, silly, I’ll show you how to do it’.

An hour and a half later, Southwold was heaving. Day trippers had arrived in their coaches and together with the resident holidaymakers were making their way to the cafes on the pier and prom in search of lunch. The sun was scorchingly hot and the quiet hum of happy laughter and chatter had risen by several decibels as folks tried to be heard above all the usual sounds of the beach. For me, it was time for me to go in search of one of my sons who was fishing off the pier, have a snack with him and then go home.

Two things remained with me from that day. The first was how much better something can be if there is 100% involvement. No friction between dads or mums because one feels they were left to keep everyone happy. No disappointment and the ‘let down’ feeling when someone can’t be bothered to join in. Secondly, the wonderful attitude of the two lads with the kite. They worked together and had fun in doing so. They knew how to take failure and persevere. May we be involved, positive and enjoy to the full the life God has entrusted to us.
Merle Sparkes, August 2017
​Return to Merle's reflections 2017 ​​​​​