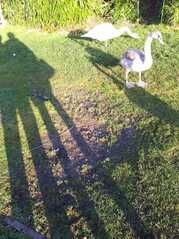 For those who enjoy the English winters and their unpredictable weather, our first frosty morning in early January came as a surprise. Up until this point, our winter had been very mild. My sister-in-law and I were enjoying a day out at Aldeburgh and Thorpeness on the Suffolk coast. The ducks were using the frozen mere at Thorpeness as a skating ring but not doing very well with the challenge and the geese had retreated to the safety of the grassy banks. We enjoyed taking photographs of the ducks and the geese. However, the photograph we took of the geese was quite humorous with the caricature shadow of the photographers in the foreground.

I’ve thought of those shadows and remembered a game I used to play as a child. The game could be given the title ‘Me and my shadow’. With my back to the sun, my shadow stretched out in front of me and, as I turned around to face the sun, it disappeared. When I could see my shadow, I tried to catch it, but I never seemed to manage to do that. My shadow copied everything I did, jumping up and down, squatting and waving my arms and legs around. There were three times when I couldn’t find my shadow – if I was in the shade, the sun wasn’t shining, or the sun was directly overhead.
​
Although that game was lots of fun, I have learnt a lot from my shadow. When I concentrate on my shadow, which by the way, has no colour in it, it is a poor reflection of me, and I take my eyes off what is around me. It is a distraction but not a very good one and I end up by missing out on what’s going on. If I stand behind someone who’s facing the sun, I find myself in their shadow and the real me is hidden from view. It is all too easy to do that in real life and we absolve ourselves from taking up challenges, in other words hiding behind someone else’s capabilities. This might seem a good idea at the time, but it doesn’t bode well for our future development. We could recede even further into the shade and become an observer, so life passes us by. Should we take this stance in life, we could find ourselves in the debilitating situation of becoming socially inept and not reaching our potential.