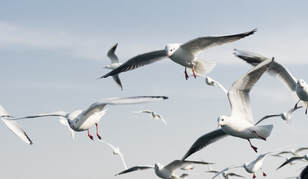 The scenes I enjoy observing the most are watching a field being ploughed and sitting on a beach on a warm, sunny day watching everyone swimming, surfing, building sandcastles, flying kites and playing beachball. I accept that gulls are part of the seaside scene but don’t appreciate their persistent, raucous cries or their ability to swoop down and deprive people of their ice creams and fish and chips.

I think the name ‘opportunist’ would aptly describe the behaviour of these large, strikingly persistent birds. Many resorts have used a variety of solutions to repel the gulls’ noise and behaviour, including spiked roof tops and signs that have been put up to discourage feeding of the birds and, in some places, penalties have been imposed. 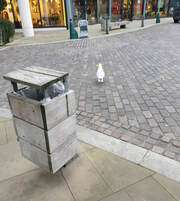 ​A few weeks ago, I sat in a coffee shop in Dorchester town centre. A very neat wooden litter bin stood on the pavement outside. This litter bin was not overflowing with empty cans, crisp packets and plastic bags; instead a white plastic bulge made from a neatly tied-up bin bag was the only evidence of rubbish in the bin. A gull was parading around the top of the bin extending its neck and endeavouring to pull the bag out with its beak. I thought it would have to give up its exploits because the bag was so neatly tucked inside. I gave up watching, sent texts and carried on a conversation with my friend. To my surprise, when I next looked at the gull, it had ripped the bag open and was sitting on the pavement inspecting a crisp packet. This packet and quite a few more were all found to be empty. The wind caught these empty packets and they started blowing around, turning the immaculate area into a bit of a tip. A family came around the corner and the children, seeing the mess, began to tidy it all up and the gull flew off in disgust. As darkness fell quickly, it had lost its opportunity to return and start all over again, and I actually felt quite sorry for it - all that time and energy with nothing to show for it.

​The episode was an amusing story to share and I confess that gull taught me much. I wondered how many times we can become the victim of an opportunist, for instance a put-down, the recipient of someone else’s bad behaviour or circumstances that seem to conspire against us. We can choose to succumb or rise above what is happening or being said. We can use a positive approach as our defence rather than retaliate or self-destruct. The art of persistence in what is true and right and not to allow ourselves to become the victim might be a healthy pursuit and reap better dividends than harsh words and thoughts both against ourselves or someone else.
Merle Sparkes
​
​Return to Merle's reflections 2020 -go to Merle's reflections 2021 - Merle's reflections 2022