Too much of a good thing
​The above title is a fitting description of my garden at this present time. Almost 10 years ago I designed a low maintenance garden. I, and others, have been very pleased with the result. There’s colour throughout all the seasons and each season displays an abundance – bulbs in the spring, early and late summer perennials and annuals, various scents and a wide variety of insects and birds. However, this year, although it looked wonderful at first glance, the garden had reached the point of untidy overgrowth. There was no option but to do a rethink, come up with a new plan and set to work. The summer pruning of shrubs was a bit more vigorous; some perennials were discarded and plant containers emptied after flowering to start afresh in the autumn for next year’s patio garden. 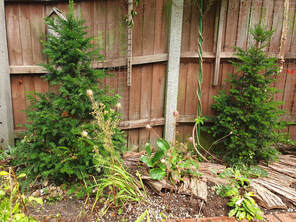 I inherited a vine from one of my neighbours. It reached the top of their side of the fence, covered my fence and rooted itself in the ground on my side. Although it’s pruned every year, it grows quickly and looks wonderful, especially in the autumn when the leaves turn red. A little while after I inherited the creeper, I planted two trees in front of it. Sadly, the yew trees were barely distinguishable. The plan to free the yew trees up reminded me of how our lives can express many lovely things - attributes which we might have inherited from others, attributes which we’ve taken time to develop as well as what comes naturally to us. At times it’s as though we become top heavy and take the opportunity to decide who we really are and how we wish to live out our lives. 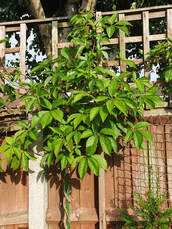 ​A pair of secateurs was applied at ground level to every stem of the creeper, except the two I wished to stay. I waited half a day until the cut stems wilted and then I set about pulling out everything that wasn’t to stay. Not much of the vine is left but, by next year, it will take off again and be controlled so as not to overcrowd the two yew trees or run along the top of two cotoneasters and attempt to climb up the neighbour’s silver birch tree. It’s a very different picture one week later, quite bare, the yew trees look good and there’s no foreign leaves among the cotoneasters.
​
What if I had started at the top where the abundance of growth was, instead of at the root? It would have been a disaster. Almost all of the fragile new growth of the vine would have been damaged. Whereas, by starting at the bottom, it was relatively easy to get the desired end result. I reminded myself of the importance to go for the root of the problem, rather than the quick fix which could miss the point. The quick fix would not bring any lasting change, whereas tackling the root gives a permanent solution.
Merle Sparkes
​
​Return to Merle's reflections 2020 -go to Merle's reflections 2021 - Merle's reflections 2022