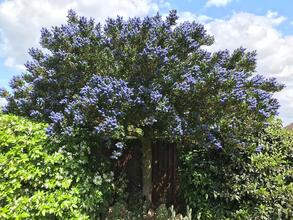 ​There is colour in my garden all year round. It starts with the early spring bulbs interspersed with a succession of wildflowers, as well as with the blossoming of many shrubs. The photograph is of a ceanothus which started life as a shrub. Three shrubs standing together were so crowded that I took a chance and trimmed down a rather overgrown ceanothus which stood between a winter flowering viburnum and a beautifully scented coreopsis. The end result of the first drastic shaping was a spindly stalk one and a half metres tall topped with twiggy branches and light blue, white-tinged flowers. Each year all side shoots growing up the stalk were removed, and the branches given a shapely haircut.

It now stands three metres tall producing a wonderful canopy for its two neighbours. The pale blue flowers have now become a rich deep blue. The bee population that enjoyed the aromatic white flowers of the coreopsis have returned to feed off the wonderful blue canopy of the ceanothus. It has taken 13 years to achieve this wonderful vision. I took a chance and it worked.

However, four years ago my vision was nearly destroyed when the dried-up solid contents of a hanging basket were inaccurately aimed, smacking into the lower trunk. To improve the soil around these shrubs I often emptied all my flower containers in the autumn. Unfortunately, the help of one of my sons went a bit wrong. He was mortified and I tried to cover up his mortification with a ‘don’t worry about it, it doesn’t seem to have done much damage’. The following year a large black patch formed on the trunk oozing thick sticky sap. My heart sank and I couldn’t understand what was going on. One of the assistants at the local garden centre asked if the tree had been banged as it sounded like a bruise. It jogged my memory and I remembered the bang it had received from the contents of the planter. I trusted his advice that, in time, it would heal. Gradually over the past couple of years the black bruise has got less and less and new bark has formed over the scar.
​
I so look forward to May when this tree blossoms and I’ve never been disappointed. With all the will and hard work in the world, with our desires to be the best, achieve the best and extend this to our family, colleagues and friends, unforeseen knocks can disturb our quest for what is good. Whether intentionally or not, unkind words, difficult situations or traumatic events, whether it be illness, failure or even our own mistakes, can upset our good intentions and leave us and those we care for in bewildering places. But, as in the case of this tree, life has gone on, a wound is still healing, but the beauty of that tree is visible for all who visit my garden and the neighbours who surround us. For myself that tree is a great encouragement that, however forceful the knocks of life can be, there is still opportunity for a healing process. The inner beauty of this tree is its ability to blossom – and so it is with us when life is tough.
Merle Sparkes
​Return to Merle's reflections 2020 -go to Merle's reflections 2021 - Merle's reflections 2022