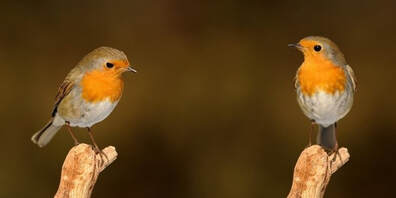 For weeks now my garden landscape has changed. The delights of varied flowering shrubs and the array of colours of early summer flowers have changed to a dismal yellow, burnt orange and various shades of brown. I have to admit that I gave up my rescue bid by doing minimal watering only so that the drought didn’t destroy my garden completely. The birds disappeared with their end of season moult and bees, butterflies and insects were in much smaller numbers. The lawn shrivelled to nothing and the foliage of most of the trees and shrubs became limp and lifeless. What a dismal scene!
​
Autumn announced its arrival with a chill in the air, a stark reminder that winter was around the corner. BUT at the same time the heavens opened, and the rain fell down. Now that was a very, very welcome relief from the summer’s dry heat. This morning my garden landscape is wonderful. For a short while there was a late spring and many of the plants and trees came back to life and the grass is a lush carpet of green. The birds are back – the residential robins were the first to appear followed by blackbirds, starlings, blue tits, coal tits, dunnocks, sparrows and a few wrens. Bumble bees and the odd honeybees are at work and a few large dragonflies are buzzing around. The slugs leave their silvery trails after a night’s foraging and one or more hedgehogs have appeared.

The lawn survived because it was shaded by a neighbour’s silver birch tree. For years I have willed the neighbours to coppice this tree so that it more resembles its true state of silver birch and not that of an oak with its spreading branches. Sometimes the things that annoy us turn out to be a great blessing in times of stress. I now have a changed perspective on that irritating silver birch. We need to do that sometimes, don’t we?

All this could have been better if I had, as one of my daughters-in-law did, concentrated on saving water used in the kitchen to water the garden. I have always seen autumn as the closing of one year but the taking of an opportunity to restore and regenerate for the coming year. I count myself very fortunate that I got away with minimal effort. It need not have been so, it was a choice, a reminder of how much we are in control of what we invest our time and resources in.
​
My garden benefitted from both shade and rain. We need to shelter ourselves from the heat of the moments of time and let refreshing rain, as it were, restore our vision, hope and energy for the future.
Merle Sparkes
​Return to Home page - Merle's reflections