The best - or worst 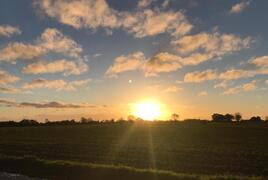 ​Extreme and unusual situations bring out the best, or worst, in us as human beings. This present pandemic is no exception. For some, the whole thing has brought to the surface troubling insecurities and fears while others have seen it as an opportunity to reach out and show love to one another.

A man with the name of Noah Muroff found himself in an unusual situation. He bought a second-hand desk on the internet for £150. He brought it home and tried to get it through the door – but it wouldn’t fit. So he began to dismantle it a little, just to squeeze it in. Behind one of the drawers, he found a plastic bag. Imagine his surprise when he discovered over £74,000 in the bag.

That raised a lot of interesting questions. Who puts that much money behind a desk drawer? And why? Who would know it was there? And how could anyone prove it was there?

What would you do in that situation? Keep quiet and thank God for your windfall? After all, you paid for the desk so perhaps the money is rightly yours anyway.

Noah Muroff is a rabbi. His moral code wouldn’t allow him even to contemplate accepting this windfall as an act of God.

Later he said, “Right away my wife and I sort of looked at each other and said, 'We can't keep this money'”. So he called the woman from whom he'd bought the desk. You might, at this point, be wondering what sort of money this was. The woman, who only gave her name as Patty, said it was her inheritance - hidden long ago and then forgotten.

In a thank you note she sent to the rabbi, Patty said: "I do not think there are too many people in this world that would have done what you did by calling me."

Noah took his whole family - including his four children - with him to Patty's house, so that they could understand the value of honesty. She insisted on refunding his purchase money and gave him a reward.
​
Extreme situations bring out what is within. For Noah, it was his honesty and integrity. He did the right thing. What about us? Some have faced the pain of losing a loved one or a business failing that might have taken years to build. What do the difficulties in our lives force up to the surface? Does our pain or fear keep the focus on us or do we let the stability and peace that come from knowing God enable us to reach through our struggles to hear, understand and touch the lives of others for good?
John Sparkes
​​​
​Return to Halesworth Community News articles