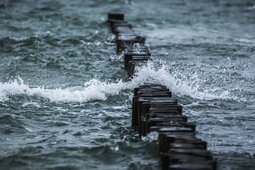 ​Why did he do it? It was as if he couldn’t help himself. One minute Peter was terrified, thinking he was seeing a ghost, and in the next, he was as brave as a lion – and walking on water!

Then there was Jesus – someone who avoided showmanship at all costs, actually encouraging his disciple to get out of a boat into a raging storm and walk on the tumultuous waves! What was the point of that?

Looking into the empty tomb on that first Easter morning throws light on our subject – as it does on a lot of things! When Mary told Peter and John that Jesus had risen from the dead, they ran to the tomb. John was younger than Peter, so he outran him and got to the tomb first. John bent over and looked in – but he didn’t go in. Peter came along – and went straight in! That is leadership. John followed him, and he saw and believed.

Jesus knew that the church needed a Peter. That streak of impetuosity would be sanctified into a spirit of daring and adventure that opens the way for others. The spontaneity that led him to say to Jesus, ‘Lord, if it’s you, tell me to come to you on the water’ was one of the vital ingredients that made Peter the effective leader that he became. When we look back through the lens of the resurrection experience and Peter’s bold preaching on the day of Pentecost, this episode on Galilee begins to make sense. This was a practice run – even though Peter failed.

In the same way, the disciples only understood why Jesus washed their feet as they looked back and saw it through the lens of the Cross. We pass through experiences that don’t make sense at the time. It is only when we look back through subsequent events that we begin to understand what God was doing in that time of struggle and difficulty.

What did Peter learn in the water-walking experience? He discovered that God isn’t interested in making things as easy as possible for us. The storm was raging just as fiercely when Peter stepped out of the boat as it had been all night. If we were an instructor in ‘How to Walk on Water in Five Easy Steps’ we would have started with gentle conditions and gradually built up to walking on wild waves. Peter had to learn to trust when everything around him was designed to destroy that trust.

When Peter’s fear turned to audacious boldness, he said to Jesus, ‘Lord, if it’s you, tell me to come to you on the water.’ Jesus said, ‘Come’. So Peter, being Peter, stepped out. There was no time to do a quick calculation as to the probable odds of being able to walk on water. He made a simple choice - either trust Jesus’ invitation - or not. He trusted and maintained that trust until the surrounding forces produced sufficient internal forces that tested that trust to breaking point. He couldn’t hold on, just as he couldn’t hold on when challenged in the courtyard of the high priest. But he was practising, learning in Jesus’ school of trust until finally, empowered by the Spirit, he preached powerfully and fearlessly at Pentecost. The walking on water was a means to the end of learning to walk on the word of Jesus.
​
What has Jesus said to you? What has he called you to do? What has he promised you? Has he told you to let go of anxiety, guilt and low self-worth? Has he said to you that you can live in freedom and joy in the midst of your current circumstances, whatever the demands of life? However powerfully our emotions attempt to drag us down, do we trust Jesus’ word to us as to our value and our security in him because we belong to him? Do we yield to powerful negative emotions or build our lives on that simple invitation to ‘Come’? Let’s keep our eyes on him, the one whose word we can trust completely.
John Sparkes
Return to Bible Insights