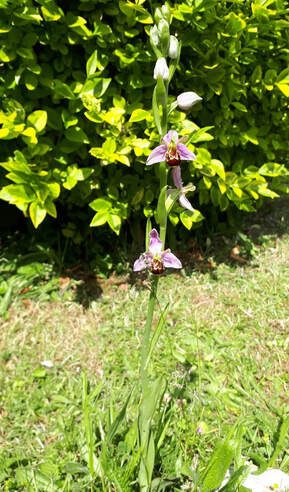 A good friend of mine asked me if I had realised there was a bee orchid growing in my front garden. When she showed it to me, I confessed that I thought it was just another weed growing close to the wildflower patch by the fence. I’m quite envious of my friend’s knowledge of flowers, and especially those growing in my garden.

I have closely guarded my belief in this bee orchid as it has grown over the weeks. The worst-case scenario would have been it falling foul of the lawn mower. It has taken six weeks of nurturing for it to put out its long stem topped by close-knit clusters of buds. Sure enough, as the buds opened, we could see the full character and beauty of a bee orchid, each flower’s centre resembling that of a bee gathering pollen.

I learned much in the waiting time from its resemblance to a weed to the opening of the first bud. First of all, I had to believe in my friend’s superior knowledge. Then I had to be patient and protect the supposed treasured specimen of wildflowers. Most of all I had to observe it growing so that I didn’t miss the opening of each bud. The final part was easy - I showed it off for every visitor to see! The children were fascinated when my husband said “Come and see this orchid. What type of orchid is it?”. Every child said it must be a bee orchid because there’s a bee in it. There was an incredulous surprise when he said, “That’s not a proper bee - it just looks like one, it belongs to the plant”.
​
I wonder how we react when someone praises us for a quality. Do we recognise that there is something in us which they’ve seen that is good and valuable, or do we fob them off? Do we find it difficult to accept praise where praise is due? In other words, praise for who we are and what we do. Perhaps it would do us good to accept that we are better than we think we are, so that we can enjoy being true to ourselves at the same time as enriching someone else’s life. Wouldn’t it be amazing if other orchids in the future grew alongside this orchid in my garden. It is up to me to guard it for the future. We need to take seriously someone’s appraisal of us.
Merle Sparkes
​Return to Home page - Merle's reflections